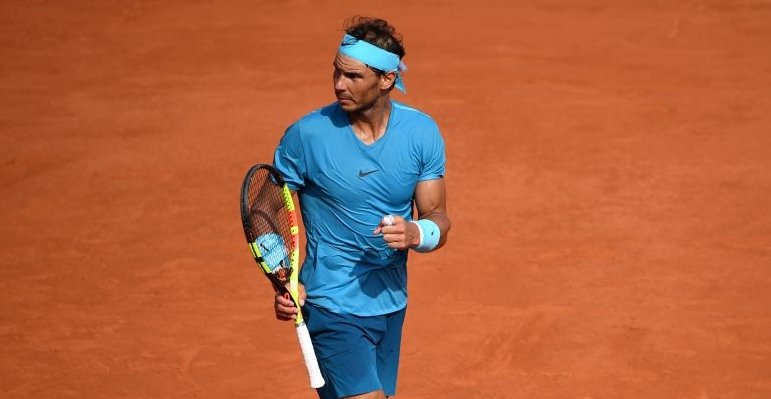 By HOWARD FENDRICH PARIS (AP) – Rafael Nadal improved to 11-0 in French Open semifinals. To get to 11-0 in French Open finals, he’ll need to get past the only man who has beaten him on red clay over the last two seasons. After dealing with some tight moments early, Nadal overwhelmed 2009 U.S. Open champion Juan Martin del Potro 6-4, 6-1, 6-2 the rest of the way Friday. The No. 1-ranked Nadal compiled a 35-20 edge in winners while making only 19 unforced errors Friday.

Nadal saved three break points at 1-all in the opening set and another three at 4-all. After he held there, that was pretty much that for del Potro.
Nadal broke to take that set and was on his way, taking 14 of the last 17 games. “The first set was very difficult, with too many chances for Juan Martin,” Nadal said. “I am a little bit fortunate to win the first set.” This was the No. 5-seeded del Potro’s first semifinal at Roland Garros since 2009. He missed the tournament every year from 2013-16 because of injuries, including three operations on his left wrist. In the fourth game Friday, del Potro clutched at his left hip after being wrong-footed by one shot from Nadal and was visited by a doctor at the next changeover.

Thiem has 3 wins on red clay over Nadal – all in best-of-3. pic.twitter.com/Kk9K0YeSRM

Soon enough, he was yelling at himself, the very picture of exasperation thanks to Nadal’s relentless ball-tracking and shotmaking. On Sunday, Nadal will face No. 7 seed Dominic Thiem, a 24-year-old Austrian who reached his first Grand Slam final by ending the surprising run of 72nd-ranked Marco Cecchinato of Italy 7-5, 7-6 (10), 6-1.

If he does, Nadal (32) and Federer (36) will have split the last six Majors. Greatness. pic.twitter.com/RqMwcuiDoC — Adam Zagoria (@AdamZagoria) June 8, 2018

Over the past two seasons, Nadal is 49-2 on red clay, with both losses coming against Thiem: in the quarterfinals at Rome in May 2017, and the quarterfinals at Madrid in May 2018. “He’s an amazing player,” Nadal said. “He’s a player with big power. He’s playing with big confidence. … I know I have to play at my best. I know I have to improve a little bit.” One big difference in this meeting is that those two matches that went Thiem’s way were best-of-three-set events. The French Open, like all Grand Slam tournaments, is best-of-five for men. Nadal is now 85-2 for his career at Roland Garros, with a record 10 championships. He is 110-2 in all best-of-five matches on red clay. “He’s a big favorite against everybody,” Thiem said. “Still, I know how to play against him. I have a plan.” Thiem has been to the semifinals in Paris three years in a row. He lost to eventual champions Novak Djokovic in 2016 and Nadal in 2017. This time, Thiem instead faced Cecchinato (cheh-key-NAH’-toe), a 25-year-old from Sicily who never had won a Grand Slam match until this tournament and was the lowest-ranked men’s semifinalist at the clay-court major in 19 years. Cecchinato was accused of match-fixing and suspended for 18 months in 2016, but he appealed, and his punishment was dropped on a technicality. After dropping the first two sets he played in the opening round, Cecchinato came back to win that match in five sets, then proceeded to string together upsets. He beat No. 10 seed Pablo Carreno Busta in the third round and No. 8 David Goffin in the fourth before stunning 12-time major champion Djokovic in the quarterfinals. But Checchinato could not quite keep up with Thiem and his big baseline game. Cecchinato made some headway by repeatedly using drop shots, but Thiem eventually started tracking them down well. The pivotal part of the match was the second-set tiebreaker. Both played superbly – and both had chances to end it. Thiem went ahead 6-3, but wasted three set points there, including a bad volley into the net at 6-4 that left him chewing ruefully on his left index finger. “It was not a very nice feeling,” Thiem said. A fourth set point for Thiem was erased with – what else? – a drop shot by Cecchinato. Thiem had to weather three set points for Cecchinato, at 7-6, 9-8 and 10-9. Thiem got to 10-all with a drop shot of his own. At long last, Thiem converted his fifth set point when Cecchinato sent a forehand long. The third set was dominated by Thiem, who raced to a 4-0, two-break lead in 12 minutes. “That was definitely the key to the match,” Cecchinato said. “To get to a set apiece would have changed the match.” Photo: Jose Morgado Follow Adam Zagoria on Twitter And Like ZAGS on Facebook