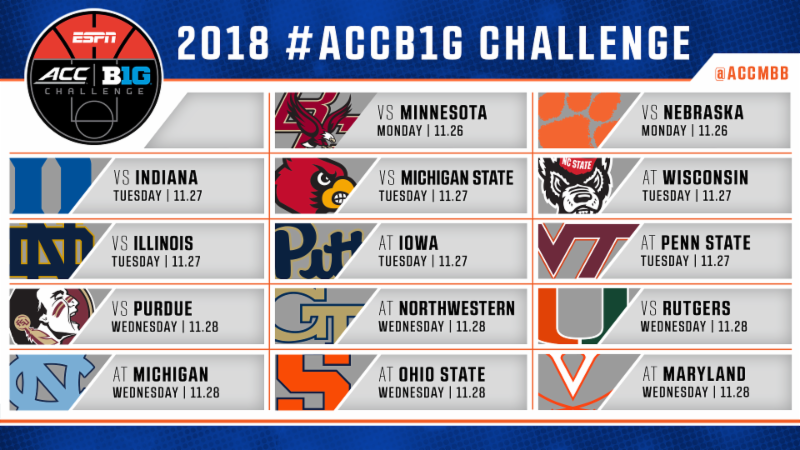 Two potential Top-25 matchups highlight the schedule for the 20th annual ACC/Big Ten Challenge, which is set to be played over three days from Nov. 26-28. Preseason No. 8 North Carolina at No. 17 Michigan and No. 18 Florida State’s home contest against No. 25 Purdue are among the 14-game slate announced on Friday. Tip times and network assignments will be announced at a later date. ESPN, ESPN2 and ESPNU will combine to televise the entire 2018 event, matching top college basketball programs playing for conference supremacy and the Commissioner’s Cup. All games will also be available via the ESPN app. Seven ACC and three Big Ten teams are ranked in Myron Metcalf’s Way-Too-Early Top 25 preseason pollon ESPN.com: No. 2 Duke, No. 7 Virginia, No. 8 North Carolina, No. 9 Michigan State, No. 14 Virginia Tech, No. 16 Syracuse, No. 17 Michigan, No. 18 Florida State, No. 20 Clemson and No. 25 Purdue. Schedule Highlights • Several games are rematches from prior Challenges: Georgia Tech-Northwestern, Indiana-Duke and North Carolina-Michigan, all met in last year’s Challenge; Nebraska-Clemson and Rutgers-Miami in 2016; Michigan State-Louisville and Illinois-Notre Dame (2015); Virginia Tech-Penn State and Virginia-Maryland (2014); NC State-Wisconsin (2010), and Purdue-Florida State, who haven’t met in this event since 2005. • Georgia Tech and Northwestern are meeting in the Challenge for the fifth time; previous matchups in 2017, 2014, 2011 and 2010; Indiana and Duke will also face each other for the fifth time, having previously met in 2017, 2015, 2006 and 2005. • Three games will have first-time Challenge matchups: Syracuse-Ohio State, Minnesota-Boston College and Pitt-Iowa. • Duke has won more Challenge games than any other team, taking 17-of-19 matchups with its only two losses coming to Wisconsin (2009) and Ohio State (2011). Team Highlights • Nine ACC and four Big Ten teams in this year’s Challenge competed in the 2018 NCAA Division I Men’s Basketball Championship: Final Four team Michigan, Elite Eight teams Duke and Florida State, Sweet 16 teams Clemson, Purdue, Syracuse, as well as early-round teams Miami (Fla.), Michigan State, NC State, Ohio State, North Carolina, Virginia and Virginia Tech. • The Challenge field has eight players ranked in the top 25 of the 2018 ESPN Recruiting Nation 100, including six of the top 10: No. 1 R.J. Barrett (Duke), No. 2 Zion Williamson (Duke), No. 3 Cam Reddish (Duke), No. 5 Romeo Langford (Indiana), No. 6 Nassir Little (UNC), No. 10 Jalen Smith (Maryland), No. 17 Tre Jones (Duke) and No. 21 Coby White (UNC). • Duke boasts the No. 1 incoming class with the top three players in the ESPN 100, followed by No. 7 North Carolina, No. 10 Notre Dame, No. 11 Indiana, No. 13 Maryland, No. 14 Michigan State, No. 16 Michigan and No. 20 Ohio State in the top 20 of the 2018 ESPN Recruiting Nation Class Rankings. 2018 ACC/Big Ten Challenge Schedule: Monday, November 26
• Minnesota at Boston College
• Nebraska at No. 20 Clemson
Tuesday, November 27
• Indiana at No. 2 Duke
• No. 9 Michigan State at Louisville
• NC State at Wisconsin
• Illinois at Notre Dame
• Pitt at Iowa
• No. 14 Virginia Tech at Penn State
Wednesday, November 28
• No. 25 Purdue at No. 18 Florida State
• Georgia Tech at Northwestern
• Rutgers at Miami
• No. 8 North Carolina at No. 17 Michigan
• No. 16 Syracuse at Ohio State
• No. 7 Virginia at Maryland
Networks & times will be announced at a later date. The ACC took home the Commissioner’s Cup in the last two Challenges, with 11 wins in 2017 and nine wins in 2016. The Big Ten won eight of the 14 matchups in 2014 and 2015, while 2012 and 2013 were both ties. Since its inception, the ACC has won 12 Challenges, while the Big Ten has won five Noting the ACC • The ACC led all conferences this past year and tied a league record it set a year ago with nine NCAA Tournament teams. • With its 12-9 mark in this past year’s NCAA Tournament, the ACC has finished .500 or better in each of the last 31 NCAA tournaments. The Big Ten has the next longest active streak at 12. Over that 31-year span the Big East (3), Big Ten (3), Big 12 (8), SEC (9) and Pac-12 (13) have endured losing NCAA tournament seasons at least three times each. • With 609 wins among its 15 current members, the ACC is the all-time winningest conference in NCAA Tournament history with a .614 winning percentage. • The ACC has combined to win an NCAA Tournament record 59 games over the last four years, eclipsing the previous mark of 53 also set by the ACC from 2014-17 and 1990-93. • The ACC has had multiple Sweet 16 teams in 34 of the last 39 NCAA Tournaments, including 16 years with three-or-more teams and 11 years with four-or-more. • The ACC is the only conference to win National Championships in football, men’s basketball, women’s basketball and baseball over the last four years. • The ACC has won four combined football and MBB national titles over the last five years, twice as many as any other conference. • This academic year, the ACC led all conferences with 10 bowl teams, nine NCAA Men’s Basketball Tournament teams and eight NCAA Women’s Basketball Tournament teams. (Release via ACC)
Follow Adam Zagoria on Twitter
And Like ZAGS on Facebook