Duke’s Joey Baker excited to head to USA U18 trials 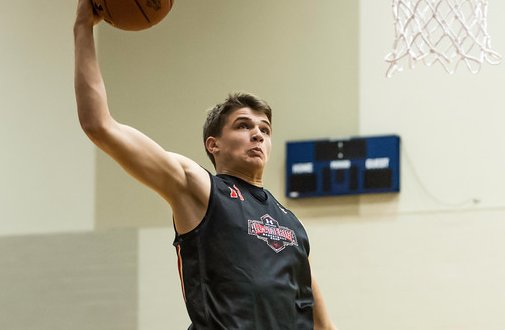 Incoming Duke freshman Joey Baker, who reclassified to join the Blue Devils this coming season and has signed his National Letter of Intent, is one of 32 athletes invited to the 2018 USA Basketball Men’s U18 National Team training camp. The camp runs May 31-June 2 at the United States Olympic Training Center in Colorado Springs, Colo., and is led by USA Basketball Men’s U18 head coach Bill Self of Kansas. “It’s extremely exciting,” Baker told ZAGSBLOG. “It’s a huge opportunity so I’m definitely looking forward to it.” Baker, a 6-foot-7 forward from Trinity Christian School in Fayetteville, N.C., was ranked No. 15 in the ESPN 60 for the 2019 class. Baker had previously committed to Duke for 2019 before reclassifying this month. He will graduate from high school a year early. Ranked No. 15 in the ESPN 60 for 2019, Baker becomes the fifth five-star prospect in Duke’s 2018 class, joining the top three prospects — R.J. Barrett, Zion Williamson and Cam Reddish — and five-star point guard Tre Jones. Baker is one of nine training camp participants set to graduate high school in 2018, and hopes he makes the team. “It will mean everything,” he said. “Being a part of something bigger than myself is humbling. It’s not often you get to represent your country so it’s just really exciting and definitely not taken lightly.” Williamson was initially listed in the U18 pool, but is skipping it to remain at Duke and familiarize himself. Training camp will begin on the evening of May 31, and the athletes will take part in sessions twice each day. Finalists for the team are expected to be announced on June 2. Barrett, the projected No. 1 pick in the 2019 NBA Draft, is not among the Canadian pool for the event. He’s currently training in Los Angeles with Kentucky’s Shai Gilgeous-Alexander before heading to Duke.