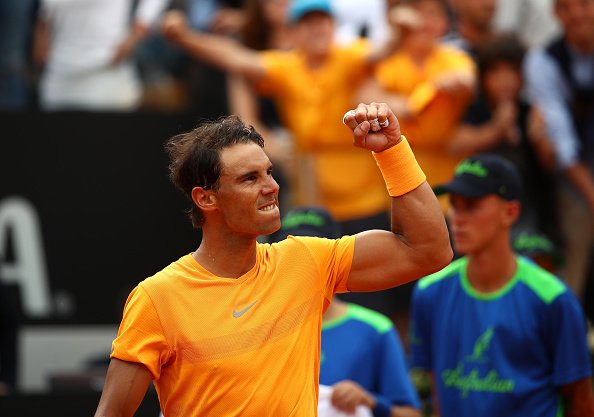 By ADAM ZAGORIA It goes without saying that Rafael Nadal will be the prohibitive favorite to win his 11th Roland Garros title when the tournament begins Sunday in Paris. But the 31-year-old Spaniard may also be the favorite on the grass at Wimbledon beginning  July 2 due to the court’s unique conditions this year. Martina Navratilova said she played on the Wimbledon courts last Saturday and the courts were “really hard” and the “bounce was high,” making her think the conditions could benefit Nadal if they remain that way into July when Wimbledon starts. “The bounce is pretty high,” the 18-time Grand Slam champion said Tuesday on a  Tennis Channel conference call. “That made me wonder. If those courts hold, if the weather holds, that would be a slight disadvantage for Roger [Federer] and an advantage for Rafa, so we’ll see. You still have to put Roger as the favorite, but not as big a favorite as Rafa is in Paris.” Federer, 36, owns a men’s record 20 Grand Slam singles titles, with Nadal in second place at 16. They have combined to win the last five men’s majors, with Federer winning the Australian Open in 2017 and ’18 and Wimbledon last year. Nadal won his 10th French Open title in 2017 and followed that up later in the summer by winning his third US Open crown. Fresh off his three-set victory over Alexander Zverev in the Rome final on Sunday that pushed him ahead of Federer for No. 1 in the world, Nadal once again remains the favorite in Paris barring injury. Nadal is 79-2 in Paris, losing only to Robin Soderling (2009) and Novak Djokovic (2015). “Barring injury, no, I do not believe that anyone can beat Rafa,” US Davis Cup captain and Tennis Channel analyst Jim Courier said. Asked who might have a prayer of topping Nadal in Paris, Courier mentioned his longtime rival Novak Djokovic, who has fallen to No. 22 in the world but pushed Nadal in the Rome semis before falling, 7-6(4), 6-3.

Rafa, the Clay GOAT, takes out Djokovic 7-6, 6-3 to advance to the Rome final. pic.twitter.com/RceqqAXVU4

“If the draw broke, Novak was able to play Rafa in something like the quarterfinals or semifinals, even that late in the tournament where he was able to build on what he just accomplished in Rome, the confidence that he built there, he would be my pick as the player most likely to take Rafa out. We know he’s been able to do that at that tournament.” Nadal is 6-1 against Djokovic at Roland Garros, with his only loss coming in the 2015 quarterfinals when Djokovic went on to lose to Stan Wawrinka in the final. Djokovic completed his career slam by winning Roland Garros in 2016. At that point he held all four major titles, but elbow problems have hampered his effectiveness and he hasn’t won a major since then. He figures to be a dangerous floater in the draw considering his ranking. Meantime, Courier also likes Zverev, 21, as a possible option to de-throne the clay court GOAT. “Sascha Zverev is another player who has every reason to believe he can compete with Rafa,” Courier said. “Dominic Thiem beat him in Madrid. That’s a different scenario because of the altitude. Madrid doesn’t play at all like Paris does. I would put a discount on that win, but that would give Dominic some confidence. Anyone beating Rafa that can’t overpower him, take the racquet out of his hand, best-of-five sets, that’s really hard to do as history shows with him.” Federer, meantime, hasn’t played since March 24, when he lost to Australian qualifier Thanasi Kokkinakis at the Miami Open. Still, he managed to briefly overtake Nadal for No. 1 in the world following Madrid. The Swiss Maestro will reappear for the grass court swing following Paris, and figures to once again be the favorite at Wimbledon, where he won his ninth title last year over Marin Cilic during a resurgent 2017. “There will be some warmup tournaments that he and everyone else will play,” Courier said. “We’ll get a better feel for his health and where his tennis is. There’s no reason to believe that he isn’t the favorite based on how well he plays on that surface, how well he’s been playing this year when he’s been on tour.” Follow Adam Zagoria on Twitter And Like ZAGS on Facebook