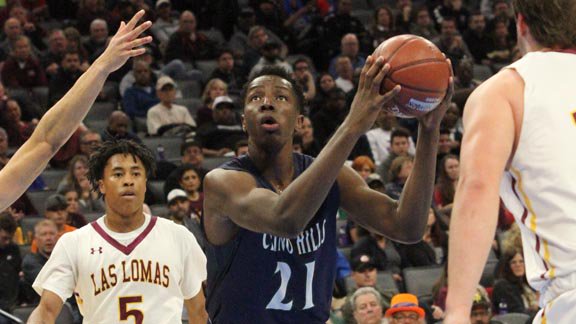 By ADAM ZAGORIA Onyeka Okongwu, the 6-foot-9 center from Chino Hills (CA) High School, committed to USC on Monday. Okongwu initially named a top five of Kansas, UCLA, USC, Washington, and Arizona State. He becomes coach Andy Enfield’s first 2019 commit. “I just wanted to rock with USC,” he told ESPN. “It’s in LA. I wanted to stay home. They recruited me the hardest and USC feels like home to me.”

He is the second Chino Hills High player honored with the award in the past three years.  Lonzo Ball, who now plays for the Los Angeles Lakers, was the 2016 Division 1 winner.

According to 247Sports, Okongwu is ranked as the No. 22 overall player in the Class of 2019 and the No. 3 player from the state of California. Photo:
Follow Adam Zagoria on Twitter
And Like ZAGS on Facebook