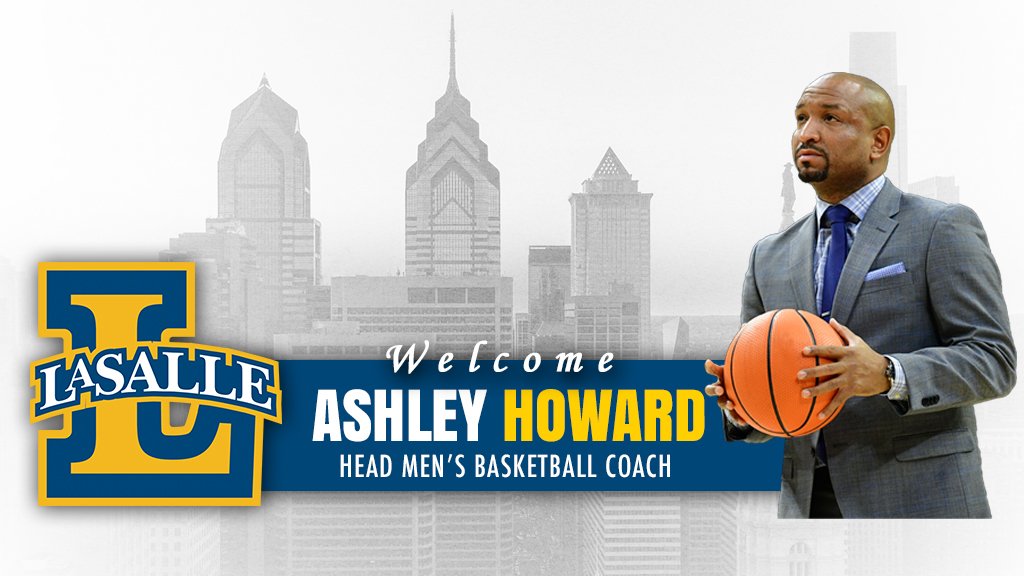 La Salle University on Sunday announced that former Villanova assistant Ashley Howard would become the school’s new men’s basketball program. Howard, who helped Villanova win two of the last three NCAA championships, will be introduced on Monday, April 9 at an 11 a.m. press conference in Founders’ Hall on La Salle University’s West Campus. “As a former assistant coach here, we know firsthand that Ashley Howard is an exceptional coaching talent who has a deep understanding of both La Salle’s basketball tradition and its important student-focused mission,” said La Salle AD Bill Bradshaw.  “This is a university that holds character, integrity and commitment to that mission in the highest esteem, and our men’s basketball coach has the unique responsibility of reflecting that on and off the court.  We have every confidence that Ash will do that – and more – in leading this program.  He is a high-energy leader with a tremendous basketball pedigree as well as a strong track record of recruiting, developing and mentoring high-quality student-athletes. His experience, especially in the past five years, reflects that Ash knows how to win. We are delighted to welcome him home to La Salle University.” Howard earned a decade’s worth of college coaching experience, beginning his career as a student assistant coach at his alma mater, Drexel University, in 2002. In 2004, Howard was hired as an assistant at La Salle University, under Coach John Giannini, and spent four years with the Explorers before returning to Drexel in 2008 as an assistant coach to James “Bruiser” Flint. Howard was part of a staff that led the Dragons to consecutive 20-win seasons, including a school record 29 victories in 2011-12. “It’s an honor and a privilege to be named the head coach at La Salle University,” said Howard. “I chose to coach at La Salle early in my career because of its incredible tradition in the Big 5, its dedication to athletic excellence, and its commitment to its student-athletes. To have the opportunity to return to campus and lead this storied basketball program – a program defined by greats such as Gola, Durrett, Brooks, Simmons, and Butler – is one for which I’m deeply appreciative. I want to thank Athletic Director Bill Bradshaw and President Colleen Hanycz for asking me to lead one of the truly great college basketball programs in the country. I also want to thank my all of my coaching mentors, Jay Wright, Chris Mack, Dr. John Giannini, and Bruiser Flint, from all of whom I have learned so much about myself, as a coach, and more importantly, as a man. I am ready to seize this moment because of what I learned from each one of them.” Howard is a former standout basketball star at Drexel University, graduating in 2004 with a degree in Communications. Before that he starred at Monsignor Bonner High School in Lansdowne, Delaware County where he still holds the single-game scoring record. He is married to Ariana Casanovas and has a daughter, Journey. Regarding the hire, Villanova head coach Jay Wright shared, “Ashley is an outstanding coach who made a great impact on our program and University in his five years with us. His passion for mentoring young men and teaching skill has been invaluable in our team’s development. La Salle has made a terrific selection and all of us at Villanova are thrilled for Ashley, Ariana and Journey as they embark on this new phase of Ash’s career. “Today marks the beginning of an exciting new chapter in La Salle University’s legendary basketball program,” said Colleen Hanycz, President of La Salle University. “The addition of Ashley Howard to our campus is just another example of the strategic steps we’re taking to move forward and reassert La Salle as a leading institution of higher education. Ash shares – and embraces – the values of the Christian Brothers as mentors who touch hearts, stimulate minds and cultivate leadership. We are thrilled to welcome him, Arianna and Journey to the La Salle family.” Release: La Salle University
Follow Adam Zagoria on Twitter
And Like ZAGS on Facebook