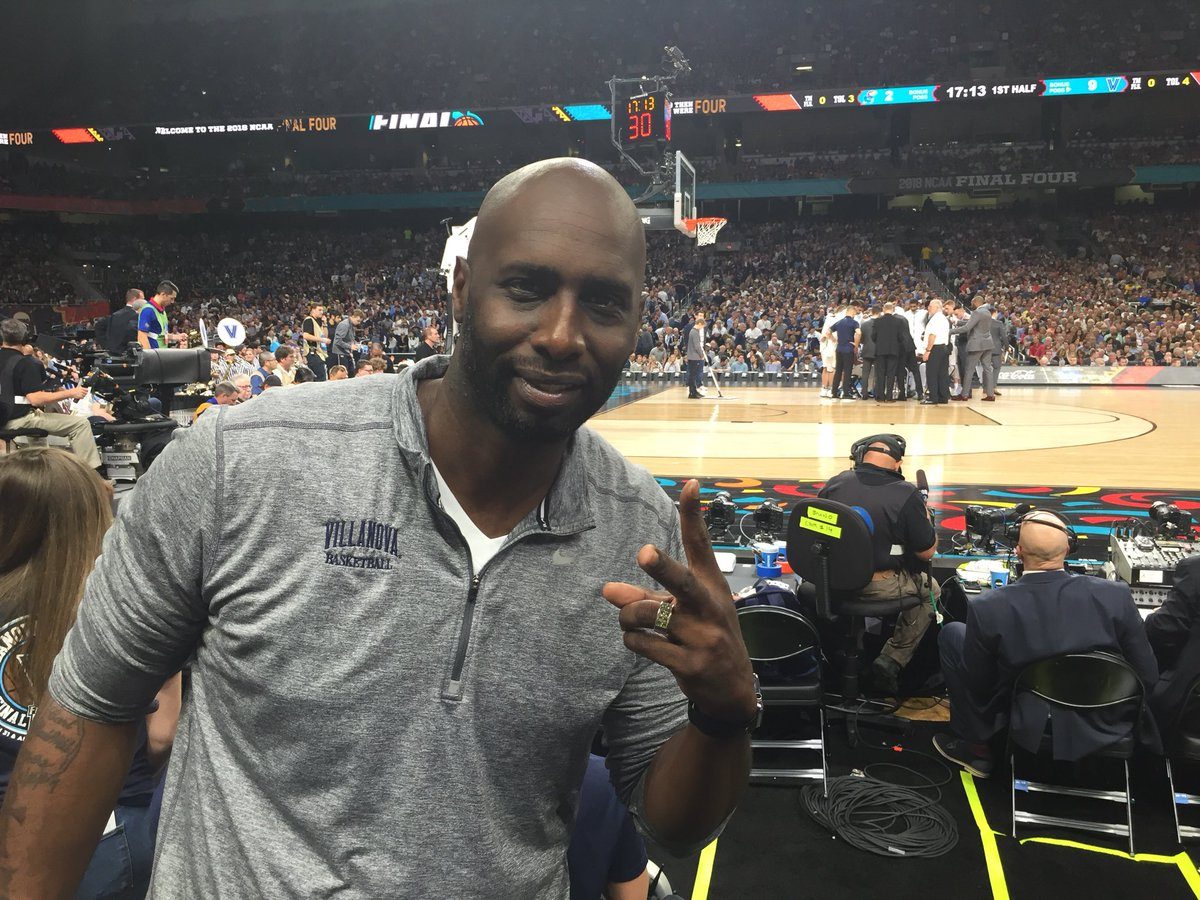 By ADAM ZAGORIA SAN ANTONIO — Tim Thomas is the one and only one-and-done player ever to play for Villanova. The Paterson (N.J.) Catholic standout left Villanova after the 1996-97 season and was the No. 7 pick of the New Jersey Nets. “I had such a great year, [head coach Steve] Lappas and [assistant] Paul Hewitt forced me to go,” Thomas told me courtside after “One Shining Moment.” “I was a pro guy taking a chance on going to college and I chose Nova.” The 6-foot-10 Thomas, who sat courtside for Villanova’s 79-62 win over Michigan in the NCAA championship game, could have gone straight to the NBA from high school in the era before the one-and-done rule came into effect. Now he believes more one-and-done players should pick the Wildcats going forward. “Our program is now on the map, so all the McDonald’s All-Americans should start looking towards us now, baby,” Thomas said. “I think the most talented players should try to get to Nova based on of what Jay [Wright] does as far as skill set and working on your weaknesses to make them a strength.” Wright has repeatedly said that he would “love” to have some one-and-done type players at Villanova, but also stressed that they have to be the right fit. Villanova missed out on Michael Kidd-Gilchrist, who was one-and-done at Kentucky, and also on Cam Reddish, a projected top-3 pick in 2019 who is headed to Duke as part of their blockbuster class. Villanova has six redshirt players on the current roster, including sophomore Donte DiVincenzo, who went off for a career- and game-high 31 points en route to Most Outstanding Player honors. Thomas thinks Wright does a great job developing players over time. “That’s great for growth and development,” he said. “That’s great for these guys. You can see a lot of these guys have a real understanding of the game and it helps.” Josh Hart, who won a title with Villanova in 2016 and now plays for the Lakers, says Villanova doesn’t need any one-and-done players to succeed. Since 2013, the program has won four Big East regular-season titles, three Big East Tournament titles and now two NCAA crowns without a single one-and-done. “I mean, we win with the kind of guys we have,” Hart said. “Would we mind them? No. Do we need them? No. We have a blue blood program, the best program in the country right now with the best coach in the country and we don’t need one-and-done guys to win. “We got high-talented guys that want to buy into something bigger than themselves.” Follow Adam Zagoria on Twitter And Like ZAGS on Facebook