The 'beef' between Jalen Rose's grandma and Sister Jean is heating up: 'We'll see what happens' | Zagsblog
Follow @adamzagoria

The ‘beef’ between Jalen Rose’s grandma and Sister Jean is heating up: ‘We’ll see what happens’ 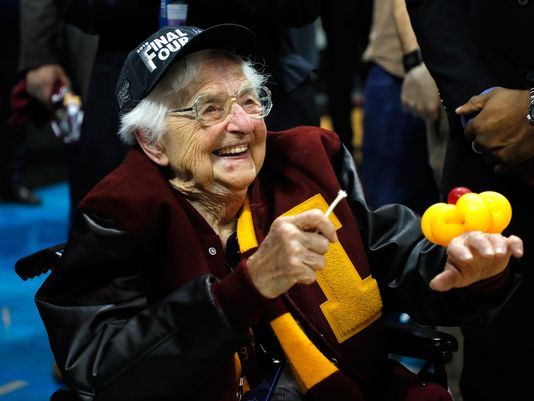 By ADAM ZAGORIA SAN ANTONIO — The “beef’ between Jalen Rose’s grandma and Sister Jean is heating up. “Sister Jean, it’s been a good ride,” Mary Belle Hicks, Rose’s 100-year-old grandmother, said this week on Instagram while she was wearing a Michigan shirt and hat. “But it’s over Saturday. Go Blue.”

Asked about the comments on Friday, Sister Jean Delores-Schmidt, the 98-year-old Loyola-Chicago chaplain and international icon, answered back. “I saw it on Facebook the other day,” she told a roomful of reporters here on Good Friday. “I also heard that she said she’s out to get me, so we’ll see. Somebody said, ‘Maybe you need a pair of boxing gloves,’ and I said, ‘Well, we’ll see what happens.'” When Jalen Rose was told about Sister Rose’s response, he said on ESPN, “They’re so adorable.”   Sister Jean also had some other gems (transcription via DetroitNews.com): * On if God is a basketball fan: “He probably is. And he’s probably a basketball fan more of the NCAA than the NBA. I’ll wager that your viewer audience is very large this time and that if you compare it to the NBA when they’re playing, it will be different. And I say that because these young people are playing with their hearts and not for any financial assistance.”

* On having her face on socks and T-shirts: “I sort of got used to that when, some years ago, the dance team did a face, but it was a sketch on their shirts. And then we have those cardboard faces – you see those all over. And I see more pictures of even people I don’t even know who are not Ramblers. I see them and I think to myself, ‘Well, maybe I’ll get a pair of socks myself to wear around.’ It’s overwhelming to me, and my bobblehead. … I’m not saying this in a proud fashion, but the first bobblehead we gave away at a game was against Milwaukee. And then this one is updated with different Rambler clothes. I think the company could retire when they’re finished making these bobbleheads.”

* On the key for an average person to have their prayers heard: “Well, it all depends on how hard you work for it. We have a little slogan that we say: worship, work and win. And so, you need to do all those things. God always hears but maybe he thinks it’s better for us to do the ‘L’ instead of the ‘W,’ and we have to accept that.”

Kansas' Malik Newman is playing the best ball of his life, and that should scare the others teams in the Final Four