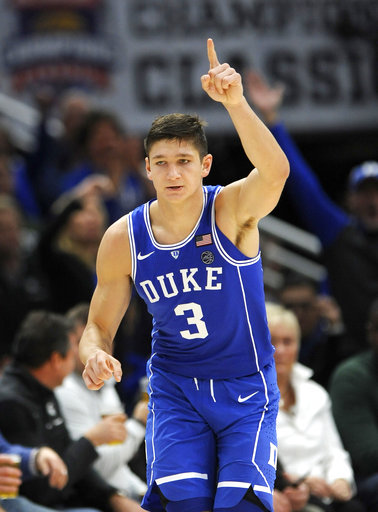 The Internet wasted no time in having fun with Grayson Allen’s butt trip. Tyler Conway of Bleacher Report set Allen’s hip check of North Carolina’s Garrison Brooks to Juvenile’s “Back That Azz Up.”

I set Grayson Allen’s butt trip to “Back That Azz Up.” Have a nice night. (h/t @rodger_sherman for the idea) pic.twitter.com/2jiXyZiv4j — Tyler Conway (@jtylerconway) March 10, 2018

Late in the first half of North Carolina’s 74-69 win over Duke in the ACC Tournament semifinals on Friday night, Allen, who already had a history of tripping, got a Flagrant-1 foul for hip-checking Brooks, who went down hard and stayed down in the backcourt as North Carolina scored. Officials stopped play and went to the courtside monitor to check a replay. Brooks was OK and made two free throws with 52.7 second left. “He was just running by me, I kind of feel like he stuck his leg out,” Brooks said. “But that’s what he does.” “Yeah, they got a fast break and I bumped him and fouled him,” said Allen, who was reprimanded by the ACC for tripping two opponents in his sophomore season. After Brooks addressed reporters in the locker room, a reporter gave Allen another chance to comment, at which point Duke coach Mike Krzyzewski stepped in and answered. “That was another foul in a game,” Coach K said. “Do you think that was the only time someone was hipped in the game? If you look at the low post, it’s going on all the time.” Meantime, Theo Pinson and Joel Berry said they had no issues with Allen. “Any little trip he does, if he puts a finger on somebody, you know they’re going to react,” Berry said of the fans. “So it’s always a joking thing with me and Grayson. I don’t have any hatred towards him. We’re good friends. We’re both from Florida, and we played with each other. But I just told him that you’ve just got to watch yourself because anything you do like that you know they’re going to get on you about. That’s why we laughed it off.” Said Pinson: “All of us are good friends. Me and Joel played with him on the same team in the summer. There was nothing — we’re cool with him. Just after the game we told him good game and stuff like that.” (The AP contributed) Follow Adam Zagoria on Twitter And Like ZAGS on Facebook