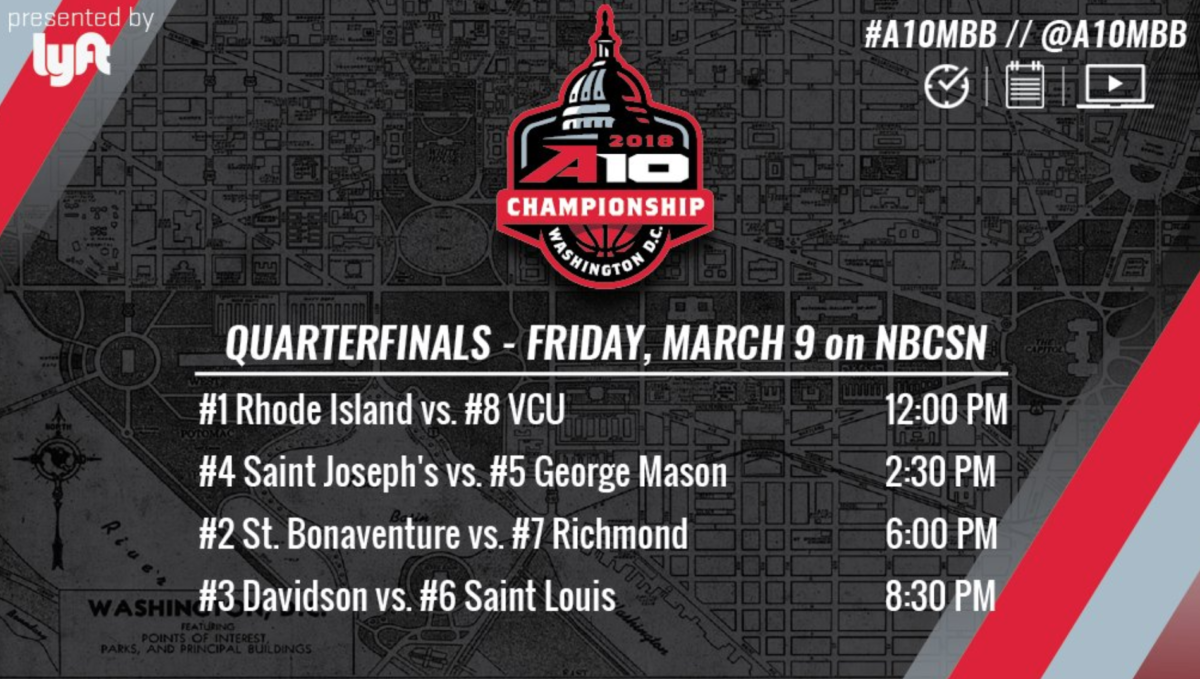 WASHINGTON D.C. — The Rhode Island Rams came into this season with some hype and for the most part, they’ve lived up to it. They won the Atlantic 10 regular season championship and are the favorite to win the conference tournament as well. They got big wins early in the season over Seton Hall and Providence and started conference play with a 13-game winning streak before losing three of their final five to end the regular season. Those three losses—against St. Bonaventure, Davidson, and St. Joseph’s—happen to have been against the second-, third-, and fourth-seeded teams in the A-10 Tournament, being played in Washington DC. All four teams are in action today.

Here’s a quick look at each of the quarterfinal matchups at the Capital One Center, home of the NBA’s Washington Wizards and the Georgetown Hoyas.

(All games are on the NBC Sports Network)

As the top seed, the Dan Hurley’s squad is taking on 9-seed VCU at noon in the day’s opener. This experienced URI team is led by senior guards Jared Terrell and E.C. Matthews but also has good balance throughout the roster. Sophomore point guard Jeff Dowtin paces the offense, dishing out 5.5 assists while also scoring at a solid clip of 9.9 PPG.

VCU is coming off a 77-72 win over Dayton in the opening round in which all five of its starters hit double-digit scoring. The underdogs will have a strong contingent in attendance from across Virginia and the DMV area who made the trip into DC.

This clash of the Rams will be a good test for two teams looking to shake off some inconsistency and end their seasons on a positive. VCU would like to see if it can exceed expectations and pull off a big upset to set the tone for a new coaching regime. Rhode Island needs to shake off two losses to end the regular season—including a 78-48 thrashing at the hands of Saint Joseph’s—and get the ship back on course heading into the NCAA Tournament.

Saint Joe’s won a tight race for the four seed, winning six of its last seven games including that big upset of URI. That one loss in those seven games, however, was at home to George Mason and in fact, the Patriots also beat the Hawks earlier in the season. The Hawks are led by seniors Shavar Newkirk (17.6 PPG, 4.3 RPG, 3.8 APG) and James Demery (17.2 PPG, 5.5 RPG), both of which are threats to go off on any given night.

GMU, playing just a few miles from its campus, beat Massachusetts Thursday night and has won seven of its last 10 games. Against UMass, junior Otis Livingston II scored 15 second-half points to help secure the win down the stretch.

KenPom gives St. Joe’s a 72 percent chance of winning this game and the fourth-highest odds of winning the tournament, putting its chances at 7.1 percent, a clear tier below the top three of URI, Davidson, and St. Bonaventure.

The Bonnies have won 12 in a row going into their quarterfinal matchup with Richmond, the 7-seed that comfortably beat Duquesne Thursday night, 81-68. They’re led by Jaylen Adams, one of three seniors and four upperclassmen in the starting lineup for St. Bonaventure. That trio of seniors has played in 347 career games and is setting a program record for wins in a four-year period. Adams averages 20.5 points per game and his backcourt mate Matt Mobley, also a senior, is a bona fide scoring threat as well at 18.2 PPG. Adams, who was named conference Co-Player of the Year, is on a number of award watch lists.

This young Richmond team overcame a 16-point second half deficit to advance to this quarterfinal matchup with the 2-seed. The Spiders have five players averaging double-digital scoring, led by fredshirt freshman forward Grant Golden, who puts up 16 points and 6.6 rebounds per contest. Another freshman, Jacob Gilyard, is the team’s primary playmaker with 4.1 assists per game. The team’s top four scorers are all underclassmen. KenPom projects a nine-point victory for the Bonnies today and gives them a 23.1 percent chance of winning the tournament, third-best in the league behind URI and Davidson.

Mike McKillop‘s Davidson Wildcats earned the 3-seed in the A-10 Tournament, meaning they take on St. Louis tonight in the quarterfinal finale. They ended the regular season winning five of their last six and eight out of their last 10 games. 6-foot-8 senior guard Peyton Aldridge leads the way for this team. The A-10 Co-Player of the Year averages 21.3 points and 7.8 rebounds per game. Freshman guard Kellan Grady is the next-best scoring threat and Jon Axel Gudmundsson, with his 5.1 assists per game, runs the point. They take on a St. Louis team which started the A-1o tournament with a 70-63 win over 11-seed George Washington Thursday evening. KenPom projects a 73 percent chance of a Davidson win and gives the Wildcats a second-best 26.2 percent chance of winning the whole tournament.