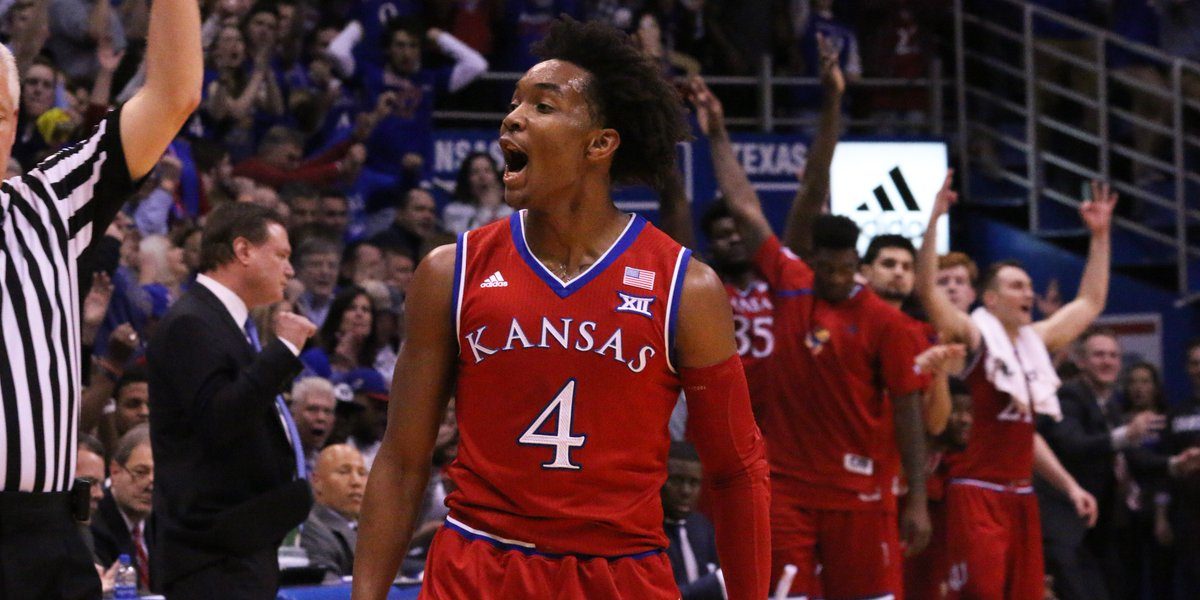 By JORDAN WOLF LAWRENCE, Kan. — Svi Mykhailiuk had 17 points, Devonte’ Graham added 10 and 11 assists and No. 6 Kansas beat Texas 80-70 Monday night to secure the Jayhawks’ 14th straight Big 12 regular-season title. It is the 10th outright Big 12 crown among those 14. Afterward, Graham broke out in tears talking about his relationship with Kansas coach Bill Self. “I knew I was going to cry, I wasn’t trying to play it off like a tough guy,” Graham said. “We got to bring all the trophies out, watch the videos and really soak it all in. It’s special.”

Man, ALL THE FEELS when @Devonte_Graham4 started talking about Bill Self and their relationship. So much love. #kubball pic.twitter.com/lonh3ytbtP

Said Self: “I thought Devonte’ Graham could own this since place the day he walked on campus and I think he has.” The Jayhawks (24-6, 13-4 Big 12) used a strong night from seniors Mykhailiuk and Graham in what was the pair and walk-on Clay Young’s senior night and final game in Allen Fieldhouse. Their powerful start helped them control the game early, forcing the Longhorns (17-13, 7-10 Big 12) to burn four timeouts in the first half. “When you care that much, and you invest that much – a freshman or sophomore can’t feel that,” Self said of the seniors. “They love this place and this place has changed them.”   Kerwin Roach II led the way for Texas, scoring 18 points and dishing out eight assists just days after hitting the game-winner against Oklahoma State. Jacob Young posted 14 points and five rebounds. The Longhorns were without star freshman Mo Bamba, who missed the game with a toe injury. Bamba, who leads the team in rebounds (10.6) and is second in points (13) per game, had 22 points, 15 rebounds and a career-high eight blocks against Kansas back in December. Udoka Azubuike had another strong night down low for the Jayhawks, scoring a game-high 20 points and making 10 of 11 shots. Azubuike led the nation in field goal percentage entering the game (77.1 percent). Kansas has now won 35 consecutive home finales, dating back to the 1983-84 season. The Jayhawks are locked in to the Big 12 tournament’s No. 1 seed. Kansas is now 31-8 all-time against Texas, and has won all of the last nine meetings. BIG PICTURE Kansas seals an outright Big 12 championship after clinching at least a share of its 14th straight conference crown Saturday with a win over Texas Tech. Texas remains on the bubble of the NCAA Tournament. If the Longhorns aren’t chosen, it will be just the third time in the last 20 years they’ve missed the NCAAs. UP NEXT Kansas wraps up its season on the road against Oklahoma State Saturday. Texas will finish the year with a home tilt against No. 20 West Virginia. Photo: KUHoops

No. 8 Kansas knocks off No. 6 Texas Tech to secure a share of record 14th straight Big 12 title