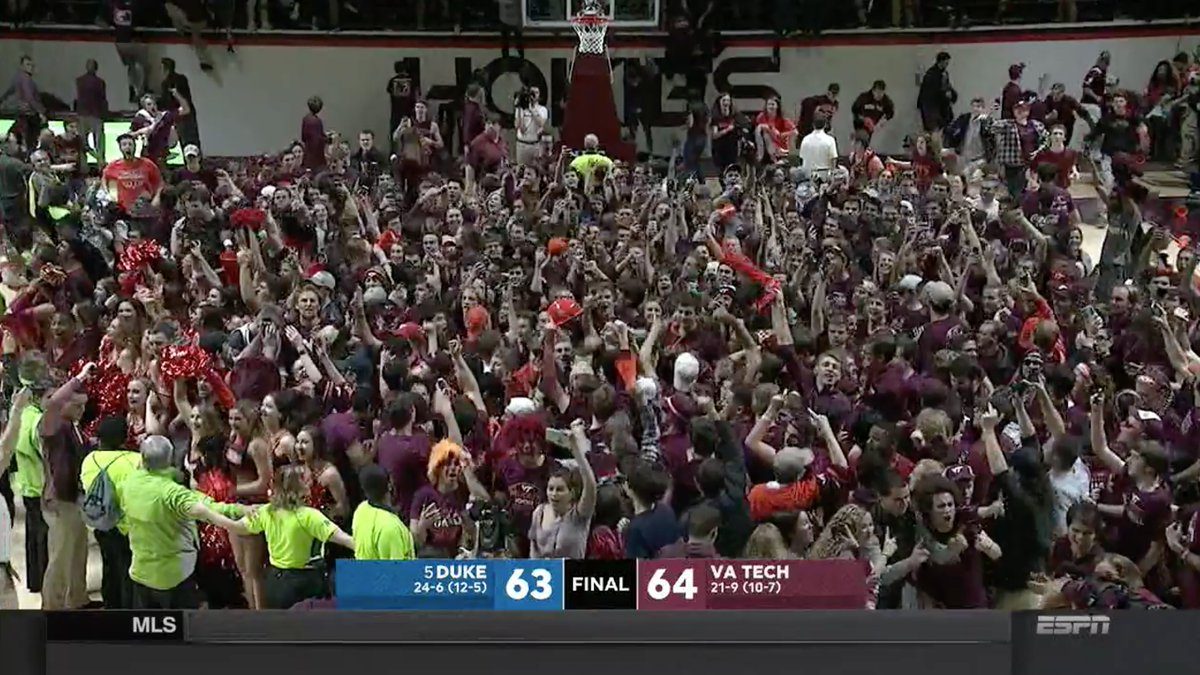 BLACKSBURG, Va. (AP) — Chris Clarke tipped in a missed shot with 4 seconds remaining Monday night, and Virginia Tech stunned No. 5 Duke 64-63. The Hokies (21-9, 10-7 Atlantic Coast Conference) had trailed almost the entire game before Nickeil Alexander-Walker’s jumper sailed over the rim and Clarke grabbed it and laid it in.

Alexander-Walker led the Hokies with 17 points, Justin Bibbs had 14 on his Senior Night and Kerry Blackshear Jr. added 13. Grayson Allen led Duke (24-6, 12-5) with 22 points, but his 3-point try before the buzzer missed. Wendell Carter Jr. grabbed the rebound, but the clock ran out before his layup went through. When officials signaled that the basket didn’t count, fans streamed out of the stands onto the Cassell Coliseum floor, celebrating another marquee victory that boosts the Hokies’ NCAA Tournament prospects. They also have a road victory at No. 1 Virginia and a home victory against No. 18 Clemson. The Blue Devils used an early 19-3 run to quiet the crowd and open a 29-14 lead, but the Hokies almost immediately responded by scoring 11 straight points with Alexander-Walker getting the first seven and Bibbs the last four. The Blue Devils’ lead was 33-27 at halftime. BIG PICTURE Duke: The Blue Devils failed to extend their school-record string of games holding an ACC opponent under 60 points to five, but they weren’t far off. They were without Bagley of the first three games of the streak. The Hokies reached 60 points on Chris Clarke’s dunk with 1:26 remaining. In Bagley’s return against Syracuse, the Orange managed just 44 points. Virginia Tech: The Hokies didn’t get their usual production from Justin Robinson and continued to get almost nothing from Ahmed Hill, who’s still averaging 11.6 points despite not having scored more than nine in more than a month. Alexander-Walker helped fill the void, and Clarke scored six of his eight in the final 1:26. UP NEXT Duke hosts No. 9 North Carolina in its regular-season finale on Saturday night. Virginia Tech travels to Miami for its regular-season finale on Saturday. Photo: Sports Illustrated