Seton Hall-Providence game suspended in second half due to slippery floor; Rodriguez to be evaluated | Zagsblog
Follow @adamzagoria

Seton Hall-Providence game suspended in second half due to slippery floor; Rodriguez to be evaluated 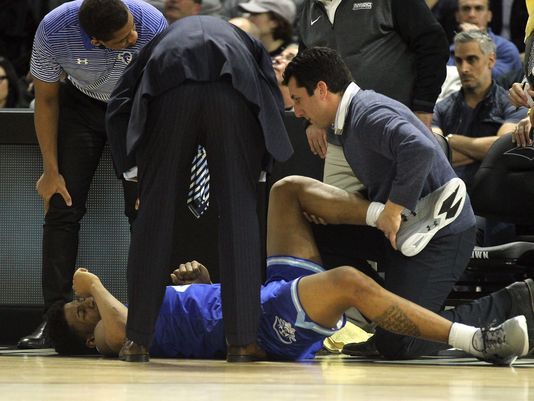 Seton Hall senior wing Desi Rodriguez will be evaluated Wednesday night after slipping and hurting his ankle during the first half against Providence at the Dunkin Donuts Center, a team spokesman told ZAGSBLOG. The game was suspended due to “unsafe playing conditions” and will resume on Thursday at noon at Alumni Hall, according to Providence beat writer Kevin McNamara.

PC game will be continued Thursday at Noom at Alumni Hall

Via McNamara: “The Pirates were leading the Friars 56-47 with 13:03 on the clock in the second half. In the first half Seton Hall’s Desi Rodriguez slipped and hurt his ankle in front of the PC bench. He did not return. “In the second half two more Pirates slipped and fell. That was apparently enough for Hall coach Kevin Willard. The three officials agreed with him and the game was suspended due to the unsafe conditions.” Seton Hall (18-9, 7-7 Big East) is due to visit St. John’s (14-13, 3-11) at Madison Square Garden on Saturday at noon. Photo: Stew Milne, Stew Milne-USA TODAY Sports Follow Adam Zagoria on Twitter And like ZAGS on Facebook

Trevon Bluiett drops 37 as No. 4 Xavier beats Seton Hall for ninth win in a row