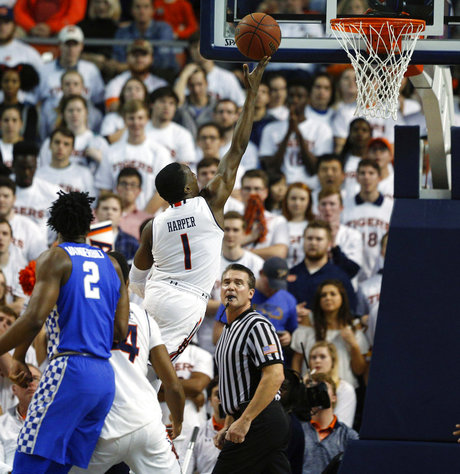 By JOHN ZENOR AUBURN, Ala. (AP) — Bryce Brown returned from a shoulder injury to score 18 points and make four 3-pointers in leading No. 10 Auburn to a 76-66 victory over Kentucky on Wednesday night. The Tigers (23-3, 11-2 Southeastern Conference) overcame a horrid shooting start to take control down the stretch, with some big baskets from Brown and clutch plays from Jared Harper. Harper also scored 18 and had seven assists while making all nine free throw attempts for the league-leading Tigers. Brown missed the Georgia game with a right shoulder injury and got off to a cool start against the Wildcats (17-9, 6-7), who dropped their fourth straight.

“We made strides. … We had a chance to win the game.” – @UKCoachCalipari pic.twitter.com/nFhmDwW1H4

He missed his first four shots but delivered a couple of big 3s in the second half. Auburn announced he would start shortly before the game. Anfernee McLemore had 13 points and 11 rebounds. Mustapha Heron scored 11 despite 4-of-14 shooting. Kevin Knox led Kentucky with 19 points and PJ Washington added 13. It was a role reversal of sorts for the two programs. The game marked only the third time a ranked Auburn team faced an unranked Kentucky team, and the first since 1987. Auburn trailed by four points before starting a 13-2 run on Brown’s 3-pointer and subsequent layup off a steal by Anfernee McLemore. Heron hit a layup and Harper made two free throws to punctuate the run with Auburn leading 68-61 in the final four minutes. Kentucky couldn’t close the gap again. The Tigers started ice cold but still managed to take a 39-33 lead into the locker room. Auburn opened 1-of-16 shooting and missed its first nine 3-point attempts. BIG PICTURE Kentucky: Has dropped four in a row for the first time since the end of the 2009 regular season. The Wildcats were unable to capitalize on a big size advantage against the Tigers. Auburn: Has won seven of its last eight games and won consecutive home games against Kentucky for the first time in 28 years. UP NEXT Kentucky: Hosts Alabama on Saturday in a CBS-televised game. Auburn: Visits South Carolina on Saturday in the first of two late-season meetings. ___
Follow Adam Zagoria on Twitter
And Like ZAGS on Facebook

Kentucky to be Well-Represented at NBA's All-Star Weekend