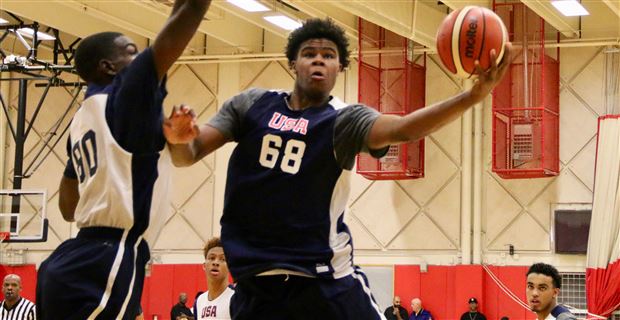 The event’s itinerary indicates the players will be housed at the George Gervin Academy, and will be divided into two teams — USA1 and USA2. They will each play a pair of games against NBA Africa Academy and NBA Global Academy on March 31 at the Alamadome. Those games will be open to parents and media, sources said. The NBA has not yet informed its personnel whether or not they can attend the games and evaluate the players, one league source said. “It’s the top kids playing against each other on a big stage,” one NBA scout said of the possibility of viewing the games. “It puts you way ahead on the evaluation scale.” “If I’m an NBA scout, I really don’t care about anyone that’s not in the top 24, so if you get a chance an an NBA scout out at the Final Four to watch these kids practice and play NBA Academies, you’re giving them a platform,” one AAU coach said. The high school players will then attend the NCAA national semifinals Saturday night at the Alamodome. The players are scheduled to depart on Sunday before the NCAA championship game on April 2. Representatives from USA Basketball and the NCAA declined comment on Monday because the program has not yet been officially announced. A formal announcement is expected soon.

The event will not take place during an NCAA evaluation period so college coaches presumably won’t be permitted to scout the high school players. The first live periods are slated for April 20-22 and April 27-29, when Nike, Under Armour and adidas all begin their circuits. It remains unclear if this signals the beginning stages of USA Basketball attempting to begin some type of American academy featuring its top high school players — or whether it is just a continuing evolution of USA Basketball developing players through camps and mini-camps. USA Basketball frequently runs such camps in advance of FIBA U16, U17, U18 and U19 championships in order to evaluate players and ultimately choose rosters for competitions. “This is a whole new thing the NCAA approved for these kids,” the AAU coach told ZAGSBLOG. “Think about how times have changed, you’re giving elite kids Final Four tickets.” The event does not compete with a live period, but if, and when, the time comes when USA Basketball runs camps that compete with live periods, it could signal a whole new foray by USA Basketball into summer basketball. “Maybe they take over live sessions,” the AAU coach said. A second AAU coach said there are several possible ways this could all unfold moving forward. “One direction this could go is that nothing could change and this is just USA Basketball and the NCAA putting together a new experience,” the second AAU coach said. “USA Basketball has always done events in the spring, the only thing that’s different is they’re doing it on Final Four weekend. A number of these kids are probably going to be in the Final Four in a year or two, so it does fall under the USA Basketball mission statement of preparing kids not just for the present but for the future.” The second AAU coach pointed out that USA athletics have previously explored “an Academy format and they’ve done it with soccer and instead of creating a new academy, they used an exciting academy like IMG [in Florida] to house their USA Soccer kids. Some of them, like Landon Donovan and DaMarcus Beasley, never went to college. They did that and they turned pro. But the vast majority of those kids did the USA soccer academy and still went to college. “So that’s certainly an idea and they could go in that direction, but they may not. Who knows?” It’s also unclear how the NBA will involve itself going forward if the one-and-done rule gets changed and players like those mentioned above can go directly to the pros from high school. “The NCAA and USA Basketball will always have to operate under a tenet of not violation anyone’s amateur status,” the second AAU coach said. “Because if five out of 24 [top kids] go to the NBA, then roughly 80 percent are still going to college.”