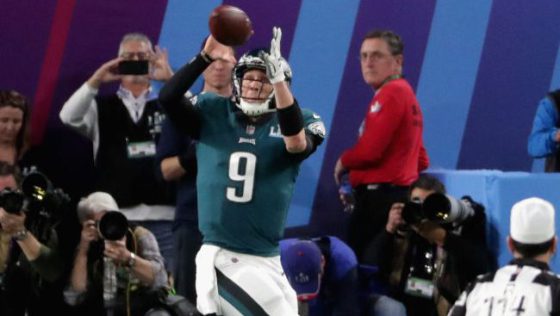 By ADAM ZAGORIA Based on Nick Foles‘ MVP performance in the Super Bowl, Philadelphia’s professional Ultimate Frisbee team is ready to offer him a contract. “After seeing Nick Foles expertly run an offense, and more importantly make a play downfield, we would love to see him in a Phoenix jersey. Give us call, Nick!” Jorge Harris, GM of the Philadelphia Phoenix of the American Ultimate Disc League (AUDL), told ZAGSBLOG. The Austin Sol from Foles’ hometown in Texas are also prepared to offer the Super Bowl hero a deal.

Philadelphia? Clearly Nick will come back to Austin. With contracts from the Sol (Ultimate) and Spurs (Basketball) he’ll be a modern day Bo Jackson! We’ve reserved your old #7.@NFoles_9 @AustinSpurs https://t.co/sV3YbnJMMw

Foles and the Eagles cross-train with Ultimate in the offseason, and Foles is apparently pretty good at the fast-moving 7-on-7 sport, which combines elements of football, basketball and soccer.  Foles is said to be a big fan of Ultimate and believes it deserves more recognition. The Phoenix, who went 4-10 last season, open the 2018 AUDL season March 31, so Foles could jump right into pro Ultimate after enjoying a run on the late-night talk shows and then a post-Super Bowl break. Of course, Foles would have to take a pay cut since the average AUDL player makes $25 a game. His cap value next season with the Eagles is $7.6 million. “You’ve got to see him in Ultimate Frisbee,” Eagles wide receiver Nelson Agholor told The New York Times leading up to the game. “We do a little conditioning in Ultimate Frisbee in the off-season. This dude’s got hands, got routes. Stupid athletic.” When Foles drifted into the end zone to catch a touchdown pass on the “Philly Special” play, he may have been calling on some of his cross-training in Ultimate. Foles looked as much like a deep cutter in Ultimate Frisbee as he did a quarterback on a trick play en route to Philadelphia’s 41-33 victory over New England for the city’s first Super Bowl championship. On fourth-and-one from the Patriots’ 1-yard-line with 38 seconds to play in the first half, Eagles coach Doug Pederson called for the play in which running back Corey Clement flipped the ball to tight end Trey Burton after receiving the ball on a direct snap. Burton’s pass floated out to a wide-open Foles on the right side of the end zone, putting the Eagles up 22-12 at halftime. “It was an amazing throw, right on the money, I just looked it in,” Foles said. “We’ve repped it for a while so I was excited to get it run in the Super Bowl.”

“Coach has some guts,” Burton said. “Big ones. It shows the confidence he has in the team.”

The Eagles aren’t the only NFL players to cross-train or experiment with Ultimate, either. Pittsburgh Steelers wide receiver Antonio Brown has played Ultimate and even showed up at an Ultimate day camp in Pittsburgh — where he caught the game-winning goal. Sterling and Shannon Sharpe once played Ultimate to showcase that their football skills applied to Frisbee also. Both the Kentucky and Wisconsin men’s basketball teams have also played Ultimate in the past. Karl-Anthony Towns, the former No. 1 pick out of Kentucky, played Ultimate at St. Joe’s-Metuchen High School and informally with his Kentucky teammates. “I just think it’s really cool,” Towns said a few years back. “I mean, it’s very fun. It was very different. That’s the thing I love. I love trying all sports out. I spent some time trying lacrosse out, that didn’t work very well, I’m not very good at it. I pitched, I played baseball, I played tennis with my sister. I just have an intriguing aspect in myself. I get intrigued by any sport and I want to try it out so Ultimate Frisbee was a huge thing here at St. Joe’s, especially with leagues created for it. So I joined the league, had a lot of fun playing it and enjoyed it a lot, especially when you have the height I have it was easy to catch.” **Across an Ultimate career that has lasted more than 30 years, Adam Zagoria has competed in College, Open, Mixed, Masters and Grandmasters Nationals. In 2013, he captained the Westchester Ultimate Summer League championship Gold team. His team also won the WSL title in 2011. Zagoria is the co-author, along with Tony Leonardo, of “ULTIMATE – The First Four Decades.”