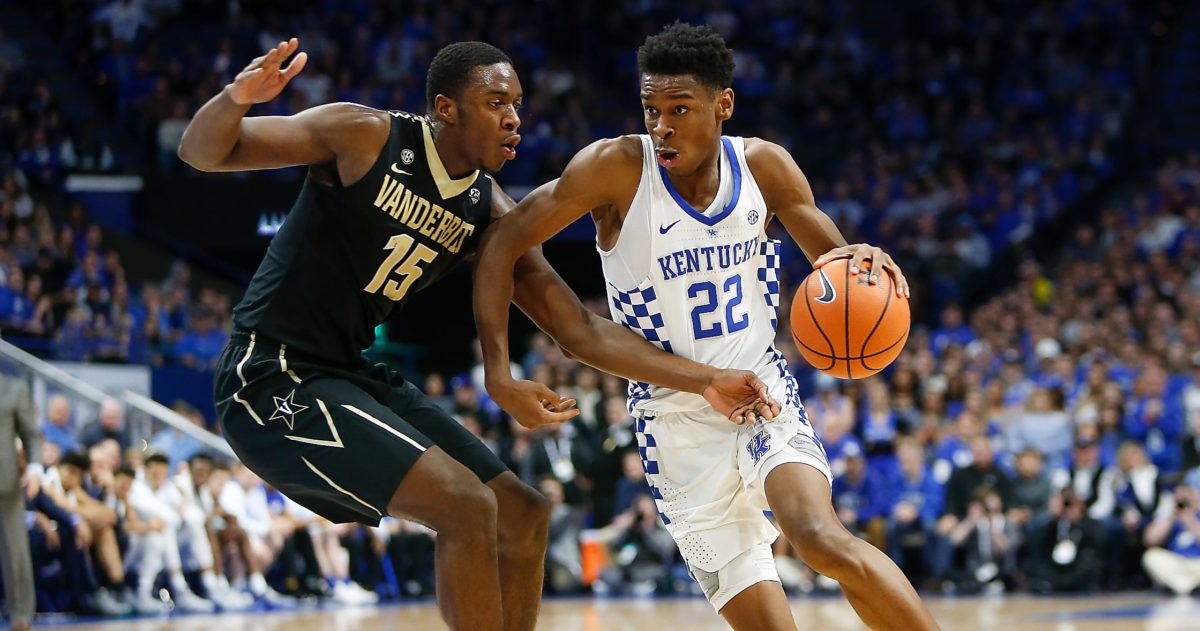 By ADAM ZAGORIA Shai Gilgeous-Alexander entered Kentucky as its lowest-ranked recruit among those on the 2017 ESPN 100. At No. 35, the 6-foot-6 Canadian was ranked behind fellow Wildcats Kevin Knox (10), P.J. Washington (12), Nick Richards (17), Jarred Vanderbilt (19) and Quade Green (24). Yet as we head into February, Gilgeous-Alexander has emerged as one of Kentucky’s best players, and arguably its top NBA prospect in the backcourt. The latest ESPN mock draft has the Canadian pegged at No. 19, seven spots below Kentucky’s highest-projected prospect in Knox and nine spots ahead of Diallo, who last year tested the NBA Draft waters before playing a single college game. “Gilgeous-Alexander has the size, length, multipositional defensive versatility and unselfishness needed to operate as a role player alongside stars,” ESPN’s Jonathan Givony wrote. Gilgeous-Alexander had his coming out party when he poured in a career-high 30 points in Tuesday’s 83-81 win over Vanderbilt. He converted 12-of-19 shots, making his only 3-point try, and 5-of-5 free throws. “His ability to get to the rim is unbelievable,” Green told SECSports.com. “He’s long, athletic, can use any hand and is crafty with the ball. He can do anything with it.” None of this is too surprising to the man who knew Gilgeous-Alexander when he was 5-foot-6 in eighth grade and then coached him in high school and AAU ball with UPlay Canada. Dwayne Washington helped him through the process where he decommitted from Florida and then choose Kentucky so he could “highlight” his skill set “on a bigger stage.” “I just see that he’s showing what he’s been trained to do,” Washington said on The 4 Quarters Podcast. “He’s very elite in the ball screen reads and passes….It’s good to see him getting a chance to do it.” Many NBA personnel have reached out to Washington, who is hearing he’s a mid- to late-first-round pick. “It changes every day like the stock market, goes up, goes down,” he said. “I’m hearing it direct, the family’s hearing it direct, is that same range. “If he’s fortunate enough to make it to the next level, he has a lot of work to do. But if he is, he’s just looking for the right fit.” When Gilgeous-Alexander does head to the NBA, he will be the latest in a long line of Canadians entering  the league. Andrew Wiggins, Kelly Olynyk, Tristan Thompson, Cory Joseph and Jamal Murray are some of the Canadians already in the NBA, and in the next few years youngers stars like Gilgeous-Alexander, Syracuse’s Oshae Brissett and Virginia Tech’s Nickeil Alexander-Walker, Gilgeous-Alexander’s cousin, could follow. R.J. Barrett, the Duke commit ranked No. 1 in the Class of 2018, is the projected No. 1 pick in 2019. Photo: Michael Reaves/Getty Images
Follow Adam Zagoria on Twitter
And Like ZAGS on Facebook

Duke, Kansas, Kentucky all lose to unranked opponents on same day for first time since 1969