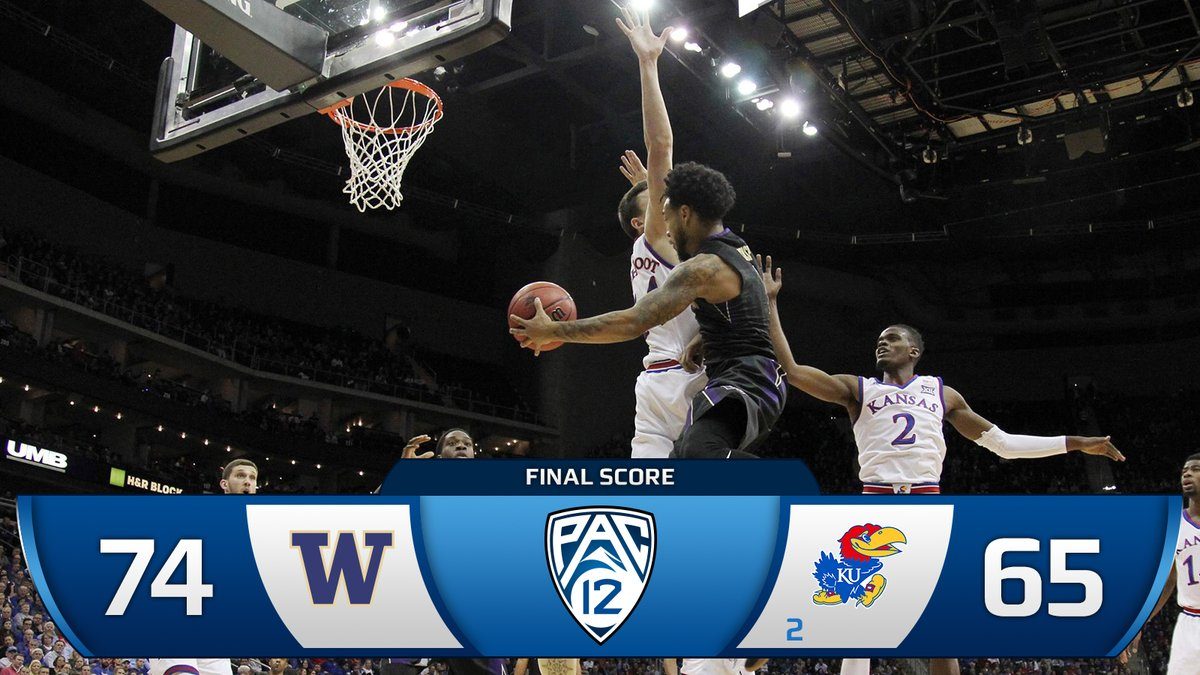 By DAVE SKRETTA KANSAS CITY, Mo. (AP) — Matisse Thybulle hit five 3-pointers and scored 19 points, Jaylen Nowell added 15 and Washington led most of the way in upsetting second-ranked Kansas 74-65 on Wednesday night. Noah Dickerson added 13 points and 14 rebounds for the Huskies (7-2), who knocked the Jayhawks (7-1) from the ranks of the unbeaten with their first victory over them since December 1974. Lagerald Vick had a career-high 28 points for Kansas, doing almost all his damage in the middle of the Huskies’ 2-3 zone. But he didn’t get a whole lot of help as the Jayhawks went 5 for 20 from the 3-point arc, lowlighted by lousy performances from sharpshooters Devonte Graham and Svi Mykhailiuk.

Graham, coming off back-to-back 35-point outbursts, was held to three points on 1-for-8 shooting, while Mykhailiuk was 3 for 12 from the field and scored eight points before fouling out. The Jayhawks should have been prepared for Washington coach Mike Hopkins’ zone defense, considering he spent 22 years on Jim Boeheim’s staff at Syracuse and Kansas had recently beaten the Orange. And in truth, the Jayhawks had little trouble getting Vick open shots in the middle of the zone. They just weren’t falling most of the night. Throw in foul trouble that sent the Jayhawks’ two big men, Udoka Azubuike and Mitch Lightfoot, to the bench well before halftime and it was no surprise the Huskies took a 36-34 lead into the break. Washington kept the pressure on early in the second half, pushing its lead to 52-44 with 12:10 left in the game, before the Jayhawks finally turned up the defensive intensity. Vick got going again inside and Azubuike’s slam of an alley-oop pass trimmed their deficit to 53-52 with 9 1/2 minutes to go. The Huskies calmed back down after a timeout, though, stretching their lead again. Thybulle got loose for a transition dunk, Dickerson added a slam of his own, and Hameir Wright’s 3-pointer from the wing made it 69-56 — their biggest lead to that point. Even when the Jayhawks caught a break, like a technical foul on David Crisp in the closing minutes, they couldn’t capitalize. Graham missed both free throws with a chance to cut into a 73-59 deficit, and Mykhailiuk proceeded to a miss a 3-point attempt as the Huskies put the game away. BIG PICTURE Washington sure didn’t look like the team that struggled to put away Seattle, California-Davis and Omaha in recent weeks. The Huskies were clearly amped up to play the first of back-to-back games against premier programs with Gonzaga on deck next. Kansas might want to reconsider games at Sprint Center. While the Jayhawks like giving their guys a taste of the building where the Big 12 Tournament is played, it comes at the expense of a massive homecourt advantage in Allen Fieldhouse. Plus, they were bounced by TCU in the tournament quarterfinals last year, then lost to Oregon in the Elite Eight of the NCAA Tournament a couple weeks later. UP NEXT Washington begins a four-game home stand with No. 12 Gonzaga on Sunday night. Kansas welcomes No. 16 Arizona State to Allen Fieldhouse on Sunday.