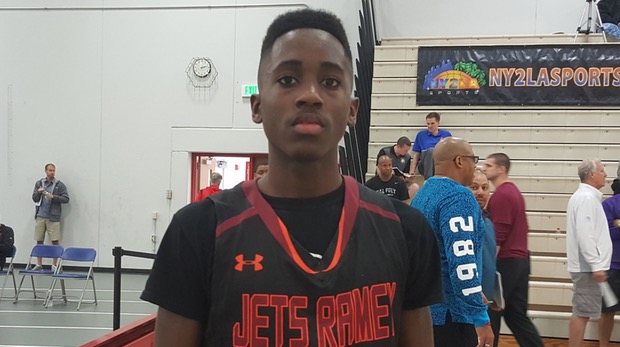 By SEAN BOCK After de-committing from Louisville amid Rick Pitino‘s firing and FBI investigation surrounding the program, Courtney Ramey, a top-5 guard in the 2018 class has set his first three official visits, his father, Terrell, told Rivals. This weekend (Dec. 8), Ramey plans to visit Oklahoma State. On Dec. 27, Ramey will take a visit to another Big 12 program in Texas. Almost a month and a half after the visit to Austin, Ramey will take his last scheduled official visit to Villanova on Feb. 10. “Courtney wants to have a relationship with the head coach, and that’s grade A, number one,” Terrell told Scout when his son decided to de-commit from Louisville in October. “Number two, he’s a student of the game, so he’s going to watch playing styles and things like that and go from there. There are some schools he likes a lot and some schools that he’s very intrigued by, so therefore those are schools we’re going to go out and visit.” Ohio State and UCLA are the two schools who seem to have the best chance of getting Ramey’s last two visits. Ramey will take his time when it comes to deciding on a school the second time around, so a later announcement is probable. According to 247Sports, Ramey is the No. 9 point guard in the 2018 class and the No. 1 player from the state of Missouri.