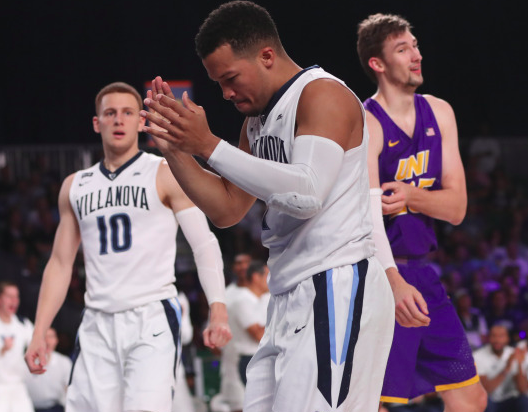 By SEAN BOCK For the fifth time in as many Novembers, the Villanova Wildcats are bringing an in-season title back to campus. The No. 5 Wildcats (6-0) pulled away from Northern Iowa Friday afternoon in the championship game of the Battle 4 Atlantis to post a 64-50 victory.

Juniors Mikal Bridges and Jalen Brunson were the catalysts for the Wildcats. Bridges had 18 points and 7 rebounds while Brunson finished with 16 points, 4 rebounds. 4 assists, and 2 steals. Phil Booth chipped in 12 points. “The reason you are able to win five of these is by having good players who are intelligent,” head coach Jay Wright said after the game. “There’s a challenge coming here. Everything is taken care of for you. You are treated like a king. But there a lot of temptations here in Paradise. If you get caught up in that, and that’s more important to you than being a good player and teammate, that can affect you.” This is the second Battle 4 Atlantis crown in that stretch for the Wildcats (2013 and 2017). The other tourney titles were the 2014 Legends Classic, the 2015 NIT Season Tip-Off and the 2016 Gildan Charleston Classic were the other championships in that run. “One thing I learned about this team here is that we don’t quit,” Brunson said. “We strive to play hard for 40 minutes. In the preseason, we had our struggles. But we kept getting better and better. We really got tested at this tournament. We kept battling back, kept grinding, kept sticking together no matter what the fatigue was or what the score was.” Villanova’s next game will be at the Jake Nevin Fieldhouse on Nov. 29 against Penn. Photo: Villanova.com Follow Sean on Twitter Follow Adam Zagoria on Twitter And Like ZAGS on Facebook