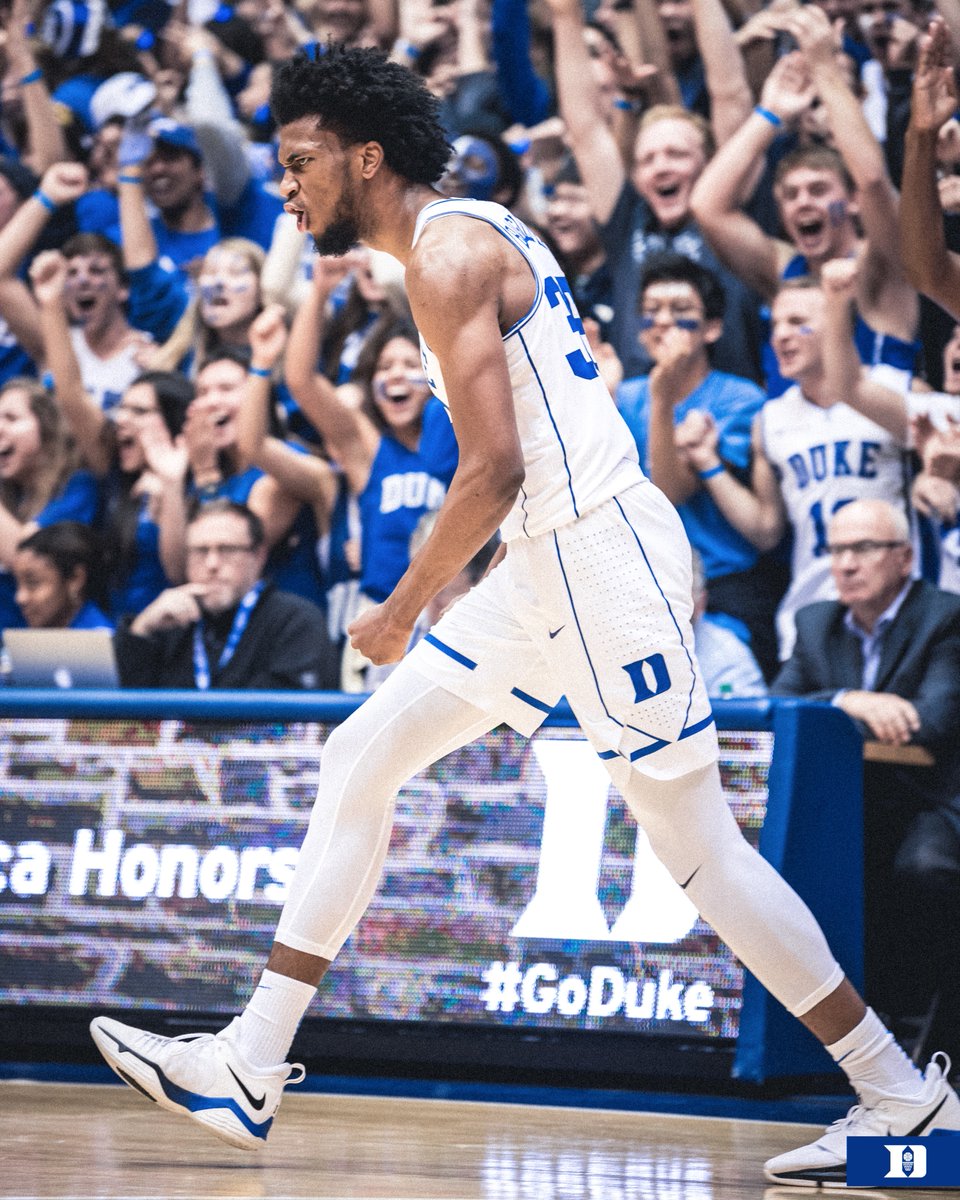 By: MIKE McCURRY After a tumultuous offseason for the ages—one in which arrests were made for paying off recruits and for shoplifting, and the most synonymous three-letter acronym for the sport was not RPI but rather FBI—college basketball needed the season to arrive in the worst way. Mercifully, it finally did on Friday. Here are some observations from the opening weekend: 1- Duke’s starting five possesses the highest ceiling…and it’s not even close. While much talk has been made about this being John Calipari’s youngest Kentucky team ever (more on a few of those youngsters below), consider that Duke is starting four freshmen for the first time since the 1982-83 season. But don’t pity Mike Krzyzewski too much. The freshman quartet consists of the top overall player in the class, Marvin Bagley III, along with three other five-star prospects in Trevon Duval, Wendell Carter, and Gary Trent Jr. Rounding out the starting five is Grayson Allen, who is finally healthy after undergoing offseason ankle surgery. So far, so good for the most talented roster in the country. Bagley went for 25 points and 10 boards in his collegiate debut on Friday, only to follow that up with 24 and 10 on Saturday. Allen has averaged 20 points thru two games, knocking down 10-of-15 three-pointers. Trent scored 17 in each victory. Duval, Duke’s X-factor, has collected 20 assists and turned the ball over just once. Duke’s starting five will give them an advantage over every opponent at the opening tip. The key for the Blue Devils, however, will be whether or not they can develop quality depth pieces in Marques Bolden, Javin DeLaurier, and Alex O’Connell going forward.   2. Coach Cal needs to hand the keys over to Quade Green. John Calipari is accustomed to having someone like De’Aaron Fox or Tyler Ulis, a point guard who he doesn’t even have to think twice about entrusting his offense with. That’s simply not the case in Lexington this season. Cal’s two primary ball handlers are six-foot freshman Quade Green—ranked as the seventh best point guard in his class—and 6-foot-6 freshman combo guard Shai Gilgeous-Alexander. Since arriving on campus, neither has created much separation in the competition for the lead role…until Sunday, that is. After Gilgeous-Alexander started in Friday’s opener, Green got the nod on Sunday. He was arguably the MVP in Kentucky’s 73-69 win over Vermont, finishing with 15 points, 4 assists, and 4 boards while committing just one turnover. Just as important, Green thoroughly outplayed SGA, who had 4 points, 3 assists, 2 rebounds, and 3 turnovers. Green looks comfortable running the show and has the superior jump shot, court vision, and playmaking ability compared to Gilgeous-Alexander. On a Wildcats squad that is short on players who can create offense for themselves, it’s even more imperative that Cal hands over the keys to Green, whose next test will come Tuesday against Kansas and Devonte’ Graham.   3. Texas A&M had the most impressive victory of any team this weekend. Texas A&M head coach Billy Kennedy had his work cut out for him on Friday. Going up against press-happy and 11th-ranked West Virginia in the season opener, the Aggies were without starting point guard J.J. Caldwell, who is suspended the first four games for a DWI arrest, as well as Co-SEC Preseason Player of the Year Robert Williams, a projected lottery pick who is suspended the first two games for violating university policy. One national pundit in particular didn’t give Texas A&M much of a chance. (Sorry, Jeff, it was just too easy!)

Texas A&M doesn't have a point guard. That's difficult enough — and then having to go up against Press Virginia. They will be lucky to score 55 tonight.

A&M looked the part of a depleted team initially, trailing by 13 early. But then Kennedy implemented a zone defense and the junior trio of Tyler Davis, Admon Gilder, and DJ Hogg got cooking, combining for 65 points alone. The Aggies outscored West Virginia 81-45 over the final 32 minutes of the game en route to an easy 23-point victory. Texas A&M’s manhandling of West Virginia, given the suspensions of Caldwell and Williams, was by far the most impressive victory of any team during the opening weekend. The Aggies are going to challenge Kentucky and Florida for an SEC title this winter.   4. This is the best offensive team that Mick Cronin has ever had. Cincinnati finished 34th in Adjusted Offensive Efficiency last season, its best mark since Mick Cronin took over the program in 2006-07. Expect the Bearcats to set a new offensive precedent this year. On Friday, 12th-ranked Cincinnati dropped 107 points on poor Savannah State. UC may not threaten the triple-digit barrier every night, but consider that six players finished in double figures—and that doesn’t even include Kyle Washington, who averaged 12.9 points last season.

Jacob Evans led the way with 19 points. Cane Broome, a Sacred Heart transfer who put up 23.1 points per game in the NEC in 2015-16 prior to sitting out last season, dropped 17 in his Bearcats’ debut, including five three-pointers. The six-foot, left-handed Broome brings a different element to Cincinnati and will replace the graduated Troy Caupain. The fact that Cincinnati is playing its home games on Northern Kentucky’s campus isn’t the only notable change for the Bearcats this season. This will be Cronin’s best offensive team yet.   5. T.J. Gibbs is Notre Dame’s X-Factor. Mike Brey had a terrific quote following a season-opening 72-58 win at DePaul on Saturday when asked about Notre Dame’s recent run of consistent success: “We’ve been able to stay old.” What does Brey mean by that? Despite dealing with significant losses in personnel each year (Steve Vasturia and V.J. Beachem this season, Demetrius Jackson and Zach Auguste the year prior, and Jerian Grant and Pat Connaughton the year before that), the Fighting Irish have been able to avoid the inevitable rebuilding season thanks to veteran returnees and, more importantly, an annual, uncanny ability to convert role players into breakout stars. In 2017-18, the veteran returnees consist of preseason All-American Bonzie Colson plus point guard Matt Farrell. The breakout star, the one who will keep Notre Dame in the polls and near the top of the ACC all season long, is sophomore T.J. Gibbs. Gibbs, who looks trimmer after dropping 17 pounds in the offseason, poured in a game-high and career-high 21 points versus DePaul. He knocked down 4-of-7 threes while showing a propensity to blow by defenders and get into the paint that he flashed at times last season when he averaged 4.7 points in 15 minutes per game. Notre Dame desperately needs a third scorer to complement Colson and Farrell. Rex Pflueger doesn’t fit that profile. Top-50 freshman D.J. Harvey is a year away from fulfilling that role. Gibbs is going to have to be that guy. Thru 40 minutes at least, it looks as if he’s more than up to the task.   6. Can Tuesday get here already?  As refreshing as it is that the season is underway, the opening weekend lacked any marquee matchups. Tuesday, then, should not disappoint. The gift that is the Champions Classic just keeps on giving, with this year’s doubleheader consisting of Duke-Michigan State and Kentucky-Kansas. All four are ranked in the Top-5. We could conceivably see rematches of both games in April. I advise you to clear your schedule. Photo: @DukeMBB Follow Mike on Twitter Follow Adam Zagoria on Twitter And like ZAGS on Facebook

Tyler Herro to Announce on November 14