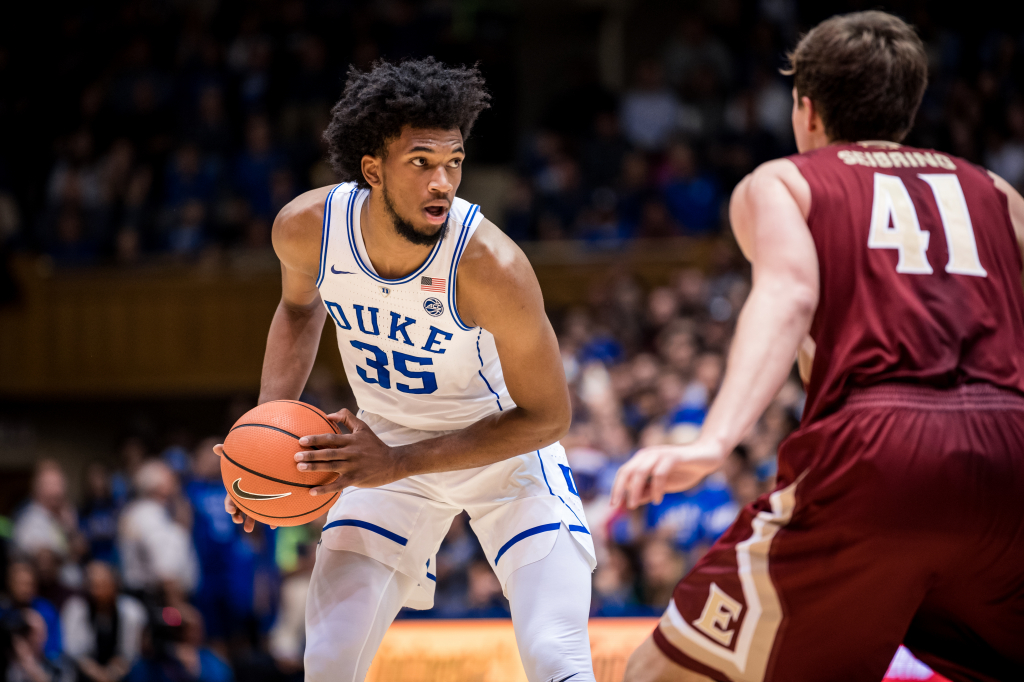 On the same day that Duke landed the potential No. 1 pick in 2019, the potential No. 1 pick in 2018 went off in the season-opener. Marvin Bagley III , who figures to be in the mix for No. 1 in 2018 along with Missouri’s Michael Porter Jr. and Real Madrid’s Luka Doncic, posted 25 points and 10 rebounds as No. 1 Duke topped Elon, 97-68. Grayson Allen added 22 points and made six of the Blue Devils’ 12 3-pointers while Gary Trent Jr. added 17 points and four more 3s. “We’ve been working in the summer, practicing and going in the weight room, we were doing all this stuff for this night right here,” Bagley said. “To come out and show the world what we can do with this great team we have. We just have fun, man, we share the ball well, we come out in attack mode.” Before tip-off, Duke landed a commitment from Canadian star R.J. Barrett, the potential No. 1 pick in 2019. Barrett chose the Blue Devils over Kentucky and Oregon. Some 75 NBA personnel are expected to watch Bagley IIII and his fellow Duke stars Trent Jr., Trevon Duval and Wendell Carter Jr. when they face Miles Bridges and No. 2 Michigan State on Tuesday in the Champions Classic in Chicago. Before then, Duke Coach Mike Krzyzewski will shoot for his 1,000th career victory at Duke on Saturday against a Utah Valley team that gave No. 5 Kentucky a tough time before losing, 73-63, on Friday at Rupp Arena. The winningest coach in men’s Division I history has 1,072 victories in a 43-season career that also includes five years at Army. (The AP contributed reporting) Photo: Duke Follow Adam Zagoria on Twitter And Like ZAGS on Facebook

How Duke commit R.J. Barrett can help lead Canada to Olympic medals in 2020 and 2024