Seton Hall's Delgado: 'I'm ready to get to the Final Four this year' | Zagsblog
Follow @adamzagoria

Seton Hall’s Delgado: ‘I’m ready to get to the Final Four this year’ 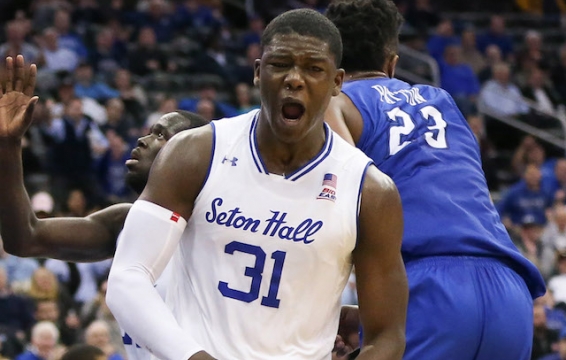 SOUTH ORANGE, N.J. — Angel Delgado has big goals for his senior season at Seton Hall. And why not? Delgado returned to campus instead of going pro last year, and now the Pirates are ranked No. 23 in both the AP and Coaches’ Polls. “I decided to come back to get my degree and finish the legacy with my guys,” he told The 4 Quarters Podcast this week. After two straight first-round exits in the NCAA Tournament, Delgado envisions a deep run next March. “I’m not the type of guy that hold things in my heart,” he said. “I’m ready for this year. I already forget about those two years. I’m ready for this year, I’m ready to get to the Final Four this year.” As Delgado spoke, he sat under the many banners in Seton Hall’s Walsh Gym, including their 2016 Big East Tournament championship banner. But he has his sights set on adding more banners. “Of course, that’s our goals this year,” he said. “I want to put not two, but three or four. That’s my goal, is to put three or four banners and leave here and say my job is done.” Seton Hall took care of La Salle, 87-74, in a charity exhibition on Thursday night that raised over $10,000 for the United for Puerto Rico hurricane effort. Delgado went for six points, nine rebounds and five assists “Against smaller teams, that’s what he’s going to have to do,” head coach Kevin Willard told reporters. “The big fella’s still not in terrific shape — he’s in good shape, it’s just a matter of — there’s going to be times when everyone’s going to come double-team him, and he’s going to continue to — he’s going to get a triple-double this year. I really think he’ll get one. If teams are going to double-team him, he’s got a chance to get one. Obviously he was close last year, but he enjoys passing. He’s a terrific passer.” The Pirates return their “Core Four” seniors of Delgado, Khadeen Carrington, Desi Rodriguez and Ish Sanogo. It could’ve been a “Fab Five” had Isaiah Whitehead not departed after his sophomore season for the NBA, where he’s now with the Nets. “It would’ve been great,” Delgado said. “But a lot of people thought we were going to be so bad when he left. But we proved people wrong, that’s all I care about.”