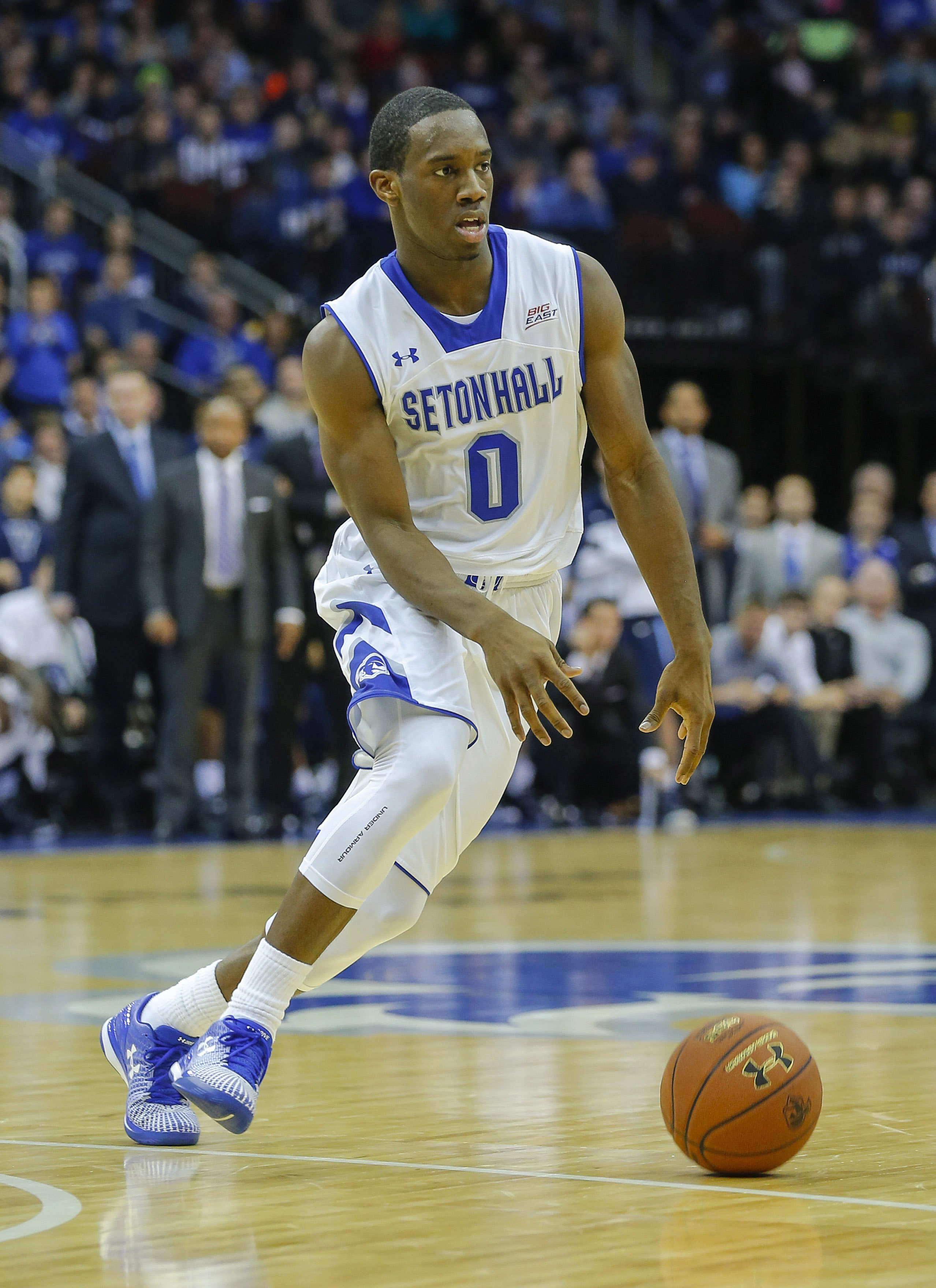 SOUTH ORANGE, N.J. — With expectations sky-high at Seton Hall, Khadeen Carrington says it will be a failure if the Pirates don’t make a March Madness run this season. Seton Hall was picked to finish second behind Villanova in the Big East Conference. They were ranked No. 23 in the USA Today Coaches’ Poll and figure to be a Top-20 or 25 team when the AP poll comes out this week. “Yeah, it’s a ways off but you definitely keep it in the back of your head and I do think it will be a failure if we didn’t make a big run like we’re capable of doing in March,” Carrington told me Monday at Seton Hall Media Day. The Pirates return their “Core Four” seniors of Carrington, Angel Delgado, Desi Rodriguez and Ismael Sanogo and have a very balanced and deep team around them. “I think we’re a pretty good basketball team,” said head coach Kevin Willard, who enters his eighth season with the best team he’s ever had. “We’re definitely as deep as we’ve ever been.” After two straight first-round losses in the NCAA Tournament, Willard beefed up the non-conference schedule to make his team’s resume more attractive. The Pirates first nine games include matchups with  Monmouth, Indiana, Rhode Island, Vanderbilt or Virginia, Texas Tech, Louisville and VCU. “It’s definitely going to help us for our resume,” said Carrington, the Bishop Loughlin product who, along with Delgado, was named to the Preseason All-Big First Team. “We got tough teams. We got VCU, Louisville on the road, we’ve got Rhode Island. Those are all good teams, those are all tournament teams, so I think playing that tough schedule early will get us ready for Big East play, and I think we’re going to do great in Big East play, too.” In order to prepare for becoming the full-time point guard, Carrington said he watched other left-handed players like Houston Rockets guard James Harden. “Every chance I get I watch him,” he said. “And sometimes in class I pull him up on my laptop. I watch a lot of Manu Ginobili, he’s a good passer. I just look for things like what they look for. I watch Mike Conley, John Wall, a lot of people like that.” Carrington hopes to learn some lessons from Harden, a natural two guard who now runs the point. “He was still playing the two and then he switched over to the one and I think he did an exceptional job,” Carrington said. “He averaged double-digit assists, so just looking at him doing that, I’m thinking, ‘Why can’t I do that?”‘ Carrington also practiced with former Seton Hall and current Brooklyn Nets guard Isaiah Whitehead a lot during the offseason. Whitehead has been bouncing back and forth between the Nets and their D-League affiliate, the Long Island Nets. Still, he has helped Carrington with making the transition to the point. “Yeah, he made that transition,” Carrington said. “At the start he struggled, too, so that’s the thing you’ve got to think about. You can’t be afraid to make mistakes. You just got to let it happen, and at the end of the year he was one of the best guards in the country. It’s not about how you begin, it’s how you finish.” Asked if Whitehead imagines what it would be like to be a part of this senior-laden Seton Hall team this season, Carrington said: “I think he would like to be a part of it but he followed his dream and he made his dream come true so you can’t really be mad at that.” Does Carrington ever imagine what it would be like if Seton Hall’s “Core Four” was a “Fab Five” with Whitehead? “Yeah, you always think about that stuff,” he said. “People always bring that up, like what if he was still on this team. I think we would be a monster team. You would have to put us like top-5 or something if he was still on this team.” Instead, without Whitehead, the Pirates are a top-25 team poised to do some damage in the Big East and beyond. And if they don’t make a run in March, Carrington and his teammates will deem it a failure.   RECRUITING UPDATE After landing Class of 2018 point guard Anthony Nelson and wing Jared Rhoden, Seton Hall has one scholarship remaining for 2018, but sources said they may opt to hold it for 2019. As of now they have no immediate plans to use the scholarship in 2018, and will take a wait-and-see approach with it. The NCAA early signing period runs Nov. 8-15.