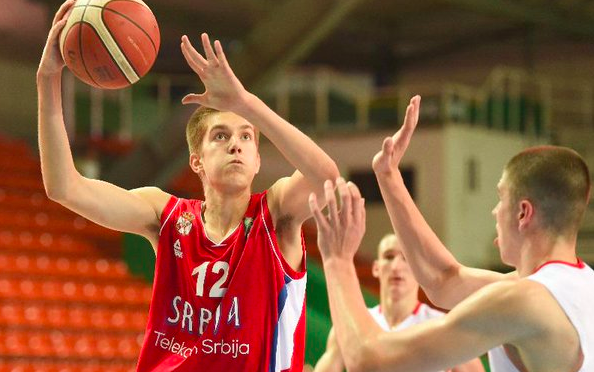 By SEAN BOCK Filip Petrusev, a 6-foot-11 forward from Serbia, has committed to Gonzaga, he told ESPN on Sunday. “They are a big-time basketball school with great tradition, especially with international big men,” Petrusev told ESPN. “They develop players very well and make the NCAA tournament every year.”

I am proud to announce that I have committed to Gonzaga University @ZagMBB #gozags pic.twitter.com/y0G2eTpwJy

Petrusev chose the ‘Zags over a slew of high-major programs including Kansas, Virginia, Indiana, Illinois, and others. Playing for Serbia in the U18 European Championships this summer, Petrusev averaged 16 points, 10 rebounds, 2.6 steals, and 1.7 blocks per 40 minutes and helped his team win the title. This winter, Petrusev will play alongside 2018 No. 1 recruit RJ Barrett at Montverde Academy (FL). Gonzaga is known for their international big men, including Domantas Sabonis (Lithuania) and Kelly Olynyk (Canada), both of which are on NBA rosters. “It’s one of the reasons I like Gonzaga so much,” Petrusev told ESPN. “It is a privilege, and also gives me motivation to follow their steps and maybe end up like them one day. I see myself fitting perfectly in their system. Petrusev is the first commit for Mark Few and company in the 2018 class. According to 247Sports, Petrusev is No. 127 player in the class of 2018 and the No. 13 recruit in the state of Florida. Photo: NorthPole Hoops Follow Sean on Twitter