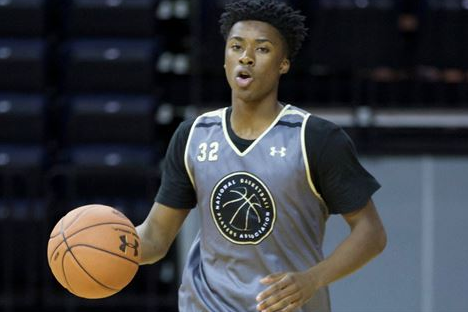 “Coach [Ed] Cooley is as good of a person as he is a coach,” Duke told Rivals.com. “He loves his players and also pushes his guys to be their best. He develops them off the court, as well, into becoming great role models.” Playing with Mass Rivals on the Adidas Gauntlet summer circuit, Duke averaged 9.0 points, 3.6 rebounds and 3.2 assists in only 16.2 minutes per game. According to 247Sports, Duke is ranked as the No. 48 overall player in the Class of 2018 and the No. 1 player from the state of Rhode Island. “David has great size, length, and athleticism for a point guard,” Mass Rivals coach Vin Pastore said. “He is unique in that he is elite on both sides of the basketball. He has an incredible first step and finishes athletically and acrobatically at the rim. Defensively, his lateral quickness and length make him a problem for opposing guards. David is just scratching the surface as a basketball player as he has grown exponentially over the last year. David has huge upside and a high ceiling. His game translates to the highest level. We expect big things from him as he continues to hone his skill set and learn the nuances of the game.” Said Cushing Academy coach James Cormier: “Aside from the obvious size, length and athleticism, what separates David is his feel for the game. His ability to understand concepts and make reads separates him from other guards in his class. The combination of size, athleticism, basketball IQ, and desire to be great will allow David to have a long career in the game of basketball. “Aside from his basketball prowess, David truly is a great person and we are proud of everything he’s accomplished here at Cushing.” Duke joins shooting guard A.J. Reeves, small forward Kris Monroe and power forward Jimmy Nichols Jr. in Providence’s 2018 class. Photo: 247Sports