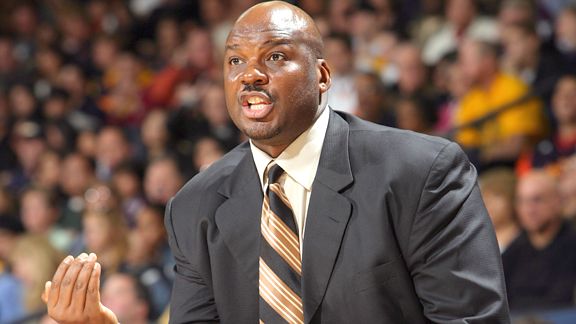 Five people — Auburn’s Chuck Person, USC’s Tony Bland, Arizona’s Book Richardson, Merl Code of Adidas and financial manager Rashan Michel — will have their initial appearances on Tuesday morning at the Daniel Patrick Moynihan Courthouse in lower Manhattan, according to the U.S. Attorney’s Office in the Southern District of New York.

Adidas’ Jim Gatto and Oklahoma State’s Lamont Evans are scheduled to make their appearances Thursday. The seven men were arrested last week and accused of helping to bribe high school recruits to attend certain colleges and sign with agents and financial advisers, and eventually with Adidas as a sponsor, when they turned professional. Each man faces between 80-200 years in prison. The four basketball coaches — Person, Bland, Richardson and Evans — have all either been placed on leave or fired by their universities. The scandal also cost Louisville AD Tom Jurich, head coach Rick Pitino and assistants Kenny Johnson and Jordan Fair their jobs in connection with Adidas’ alleged payment of $100,000 to the family of current freshman Brian Bowen. For more on Bowen and the Louisville scandal, read our New York Times story here. Photo: Auburn University Follow Adam Zagoria on Twitter