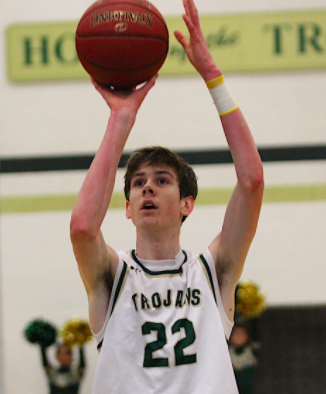 By SEAN BOCK Patrick McCaffery, the 6-foot-7 forward from Iowa City West (IA) High School, announced his commitment to play for his father, Fran, at Iowa per his Twitter on Thursday night.

it may come as a big surprise, but i have decided to commit to play for my father at the University of Iowa go hawks #hawkeyenation pic.twitter.com/2gx9QPXi4z

A four-star recruit, Iowa was the only school openly recruiting McCaffery as other programs felt they didn’t have a chance because he’s always seemed to be a silent commit to the Hawkeyes. McCaffery is the first pledge in the 2019 class for Iowa. The Hawkeyes are also in the running for 2019 top-50 prospects Chol Marial and Jeremiah Robinson. McCaffery’s older brother, Connor, is a freshman at Iowa and will be redshirting this year for basketball and play baseball. According to 247Sports, McCaffery is the no. 36 recruit in the class of 2019 and the no. 1 player from the state of Iowa.

Courtney Ramey hits the reset button on the recruiting process