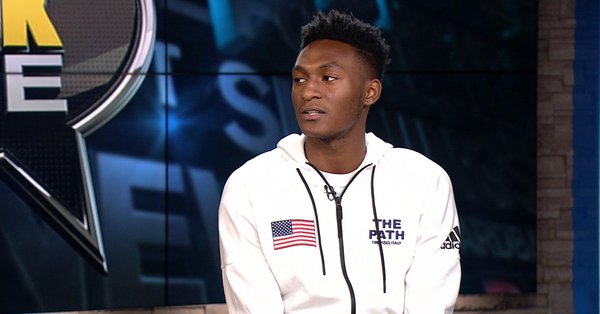 Immanuel Quickley has officially cut Maryland from his list and is now down to three schools — Kentucky, Kansas and Miami. “I am taking Maryland off my list,” Quickley told CSN Mid-Atlantic’s Rob Carlin on Wednesday night via Troy Machir. “They [Maryland] haven’t contacted me as much. So it only makes sense to go forward with those three.” The 6-foot-3 Quickley out of John Carroll High School (MD) is the No. 12 player in the Class of 2018 per ESPN.com. He visits Kansas (Sept. 1-3), Miami (Sept. 8-10) and Kentucky (Sept. 15-17). Quickley broke down his three remaining schools for CSN: Miami: “Miami has a great coaching staff and I really connected with them. They brought all four coaches to meet me. I think that was a big part of it in recruiting me.” “It’s big, especially with the head coach. That’s who is making th sub. That who is calling the plays, stuff like that.” Kansas: “I think they’ve taken players, not even like myself, players that haven’t been as talented as me and gotten them to the highest level, so I think that’s been a big part of what’s stood out. Quickley also played for Kentucky coach John Calipari on the USA U19 team this summer, and Kentucky is considered the favorite. “You just have to sit back and smile,” he said of first hearing from Kentucky. “It definitely was cool to have coach Calipari reach out to me.” Photo: CSN Mid-Atlantic