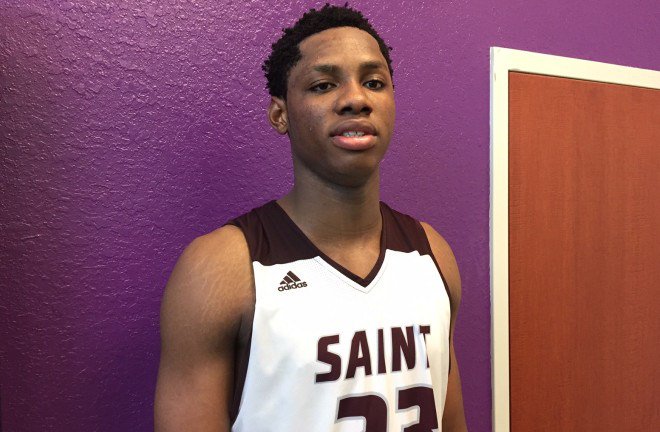 By JACOB POLACHECK Charles Bassey, the 6-foot-10 power forward from St. Anthony (TX) Catholic High School, denied reports that he was leaving St. Anthony and transferring to Aspire (KY) Academy to USA Today on Saturday at adidas Nations Global. “I don’t know anything about that,” said Bassey, who scored 14 points, grabbed eight rebounds and blocked three shots in USA Blue 2019/2020’s 88-84 win over USA Blue 2018. “As of right now I’m at my school Saint Anthony; that’s what I know.” Bassey and St. Anthony’s first-year international players were ruled ineligible by the Texas Association of Private and Parochial Schools (TAPPS) before the start of the 2016-17 season. They all became eligible when St. Anthony ended its 19-year association with TAPPS, the state’s largest governing body for private-school athletics, and joined the San Antonio-based Texas Christian Athletic League (TCAL). Bassey is considered by many to be the top player in the 2019 class following RJ Barrett‘s decision to reclassify. This summer, Bassey averaged 12.4 points and 10.8 rebounds for YIIS TX Future on the adidas Gauntlet. “I don’t know where that stuff came from,” Bassey said of the reports that he was transferring. “I don’t know about that. I don’t know what I’m gonna do. I’m at my school right now that’s the truth.” Follow Jacob on Twitter Follow Adam Zagoria on Twitter And Like ZAGS on Facebook