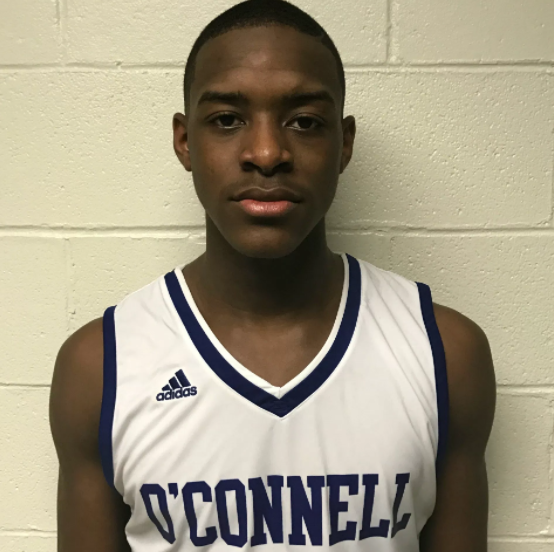 By SEAN BOCK Xavier Johnson, the 6-foot-3 point guard from Bishop O’Connell (VA), is one of the most underrated point guards in the class of 2018 and has shown he can play with the best of the best during this year’s July Evaluation Period. After scoring 16 points for Team Takeover in the championship victory over the Oakland Soldiers Friday at the Eight Tournament held in Las Vegas, Johnson talked to ZAGSBLOG and spoke of the six schools who are most involved with his recruitment. “Nebraska, Creighton, Washington, USF, UMASS, and Georgia Tech are the schools I’ve had the most contact with,” Johnson said. USF and UMASS: “The same thing that intrigues me about all the other schools with them telling me I would come right in and make an impact and being developed to go to the next level.” Georgia Tech: “Coach Pastner is a great coach, and he is turning that program back around.” Washington: “I love the relationship I and Coach Hopkins hold. He fell in love with my game when he saw me in my high school game after scoring 32 against Gonzaga, and he was also still at Syracuse at the time.” Creighton: “I really love the way they tell me I would come in and make an impact and the offensive pace they have and that fits me.” Nebraska: “Same thing. They really trust me with coming in and making an impact, and they believe that if they get me, it would be a great recruiting class.” On the EYBL circuit this year, Johnson averaged 8.0 points, 3.4 rebounds, and 2.5 assists and helped lead Team Takeover to an 11-5 record in the first four sessions and ultimately falling short in the Peach Jam title game to the Oakland Soldiers before getting revenge this past week at the Eight. Johnson is a three-star recruit, and the 67th ranked point guard in the class of 2018 according to 247. Here are highlights from Johnson’s breakout performance against Gonzaga High School’s (DC) Chris Lykes, who will be a freshman at Miami (FL), and is one of the top incoming freshmen in the ACC this year.   Photo: MakePlayz.com Follow Sean on Twitter