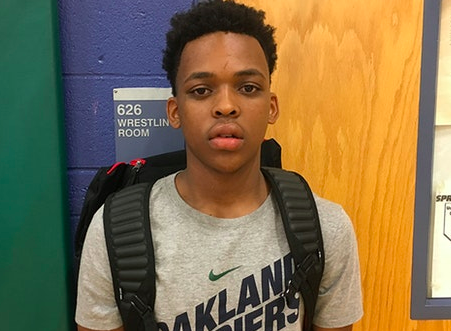 By SEAN BOCK James Akinjo, the 6-foot point guard from Richmond Salesian (CA), put together a list of three schools he will visit in the next couple months. “Indiana, Cal, and UConn,” Akinjo told Scout.com. “I’m going to take some visits in the fall and go from there.” Along with these three schools, Akinjo also holds offers Colorado, Iowa State, Maryland, Texas A&M, and UNLV among others. A three-star guard according to Scout, Akinjo was named the MVP of the Peach Jam after averaging 18.7 points and 6.7 assists over the course of four days and his Oakland Soldiers team to the title along with USC commit Taeshon Cherry. Akinjo is the 171st overall prospect and the 34th ranked point guard in the class of 2018. Photo: AllBuffs.com Follow Sean on Twitter