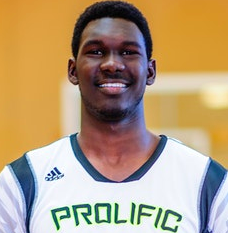 By SEAN BOCK Amadou Sow, the 2018 6-foot-9 three-star forward originally from Mali who now plays for Prolific Prep (NV), has started to seek interest from a variety of mid-major and high-major programs. After helping lead the Oakland Soldiers to the 2017 Peach Jam Title last week, Sow talked to ZAGSBLOG about his recruitment and the schools who are on him the hardest. As of now, Sow holds offers from Illinois, Pittsburgh, Colorado, Oregon State, Fresno State, UC Santa Barbara, Virginia Commonwealth, Tulane, Grand Canyon and Santa Clara. “The five schools that are recruiting the hardest are Illinois, UCSB, Colorado, Oregon State, and Pittsburgh,” Sow told ZAGSBLOG. “The only school I have talked to that hasn’t offered me is Ohio State.” With two more sessions left in the July Evaluation Period, Sow says he hopes to have his visits planned by the end of the month. “I’m building a good relationship with every single one of those schools, and I like the name of their program and the conferences they are in,” Sow said. Sow was the third leading scorer for the Soldiers on the Nike EYBL Circuit with 9.4 points per game behind USC commit Taeshon Cherry and James Akinjo. Follow Sean on Twitter