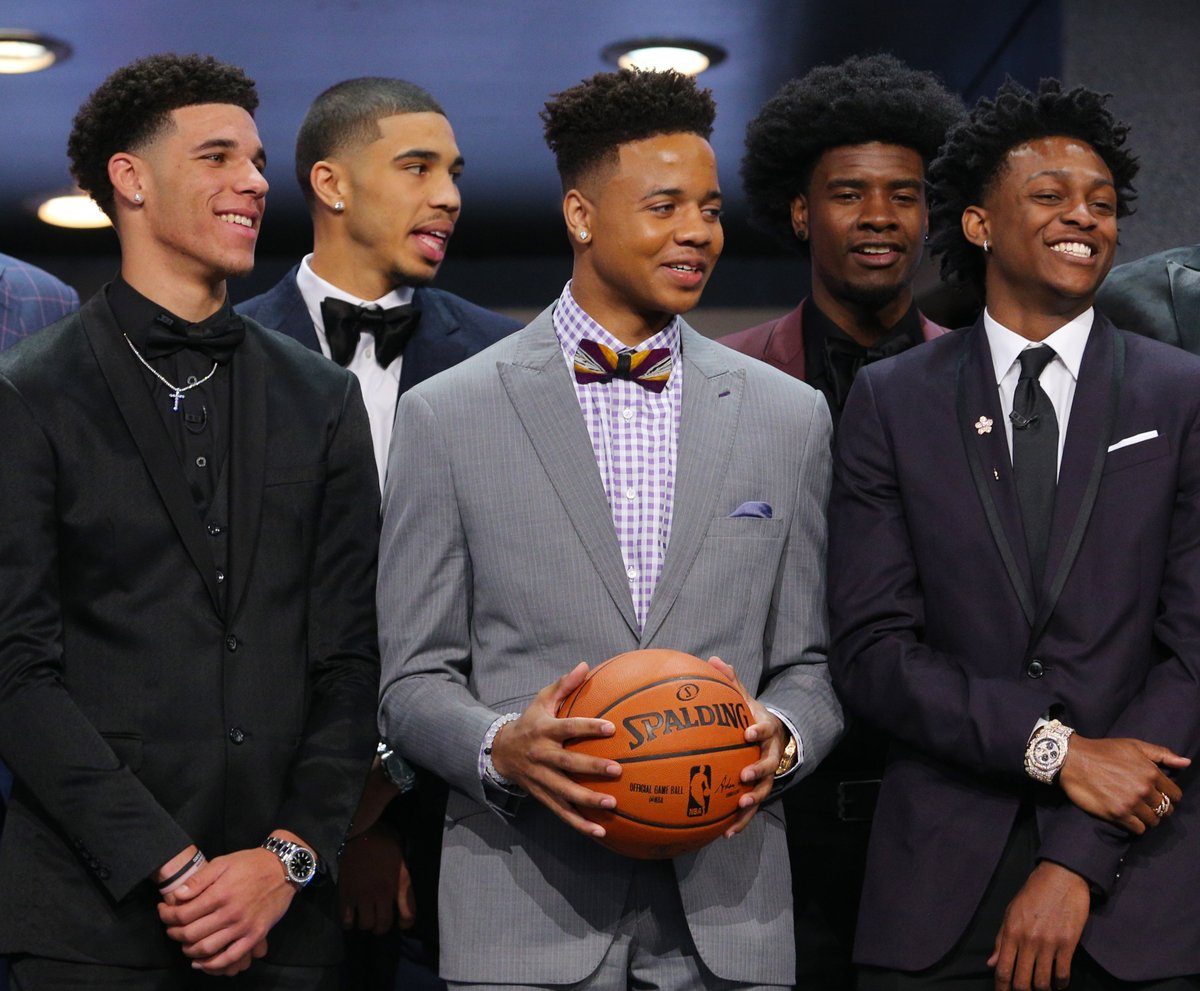 By JACOB POLACHECK After trading with the Boston Celtics for the No. 1 pick, the Philadelphia 76ers selected Washington point guard Markelle Fultz in the 2017 NBA Draft on Thursday. As expected, the Lakers followed by picking UCLA point guard Lonzo Ball with the second pick. The top ten picks are shown below: 1. Philadelphia 76ers (From Brooklyn, Via Boston)- Markelle Fultz, PG, Washington 2. Los Angeles Lakers- Lonzo Ball, PG, UCLA 3. Boston Celtics (From Sacramento, Via Philadelphia)- Jayson Tatum, SF, Duke 4. Phoenix Suns- Josh Jackson, SF, Kansas 5. Sacramento Kings (From Philadelphia)- De’Aaron Fox, PG, Kentucky 6. Orlando Magic- Jonathan Isaac, PF, Florida State 7. Chicago Bulls (Via Minnesota)– Lauri Markannen, PF, Arizona 8. New York Knicks- Frank Ntilikina, PG, France 9. Dallas Mavericks- Dennis Smith Jr., PG, NC State 10. Portland Trail Blazers (From New Orleans, Via Sacramento)– Zach Collins, C, Gonzaga Kentucky saw three players drafted in the first round with Fox, Monk, and Bam Adebayo. Monk was drafted by the Charlotte Hornets with the No. 11 pick. Adebayo was drafted by the Miami Heat with the No. 14 pick. Duke also had three players drafted in the first round with Jayson Tatum, Luke Kennard and Harry Giles. Giles went to Sacramento with the No. 20 pick. He will join Justin Jackson from UNC and Kentucky’s De’Aaron Fox. Despite already seeming like a foregone conclusion, Fultz going to the Sixers with the top pick was still one of the biggest stories of the night. “It was unbelievable, truly a blessing,” Fultz told ESPN.  “It’s been something I’ve been dreaming about. Last night, I just thought about hearing my name called. It’s unreal really. Once I heard my name called, it was like God calling me. I’m just happy.” Fultz makes it eight years in a row that the top pick in the NBA Draft was a one-and-done player (John Wall, 2010; Kyrie Irving, 2011; Anthony Davis, 2012; Anthony Bennett, 2013; Andrew Wiggins, 2014; Karl-Anthony Towns, 2015; Ben Simmons, 2016) Joining the young core of Joel Embiid, Dario Saric, and Ben Simmons, the 76ers future looks bright as their famous saying, “Trust the Process” is beginning to pay off. When asked about what “Trust the Process” meant for him, Fultz said, “To me, anything you do, stick with it. Even if it doesn’t go your way, stick with it. That’s what I’ve been doing between high school and college.” With the second pick, the Lakers selected Lonzo Ball, coming as no surprise to Ball and his family. “I’m trying to tell you. I knew this was happening before it happened,” Lavar Ball told ESPN. ““It’s a wonderful feeling but I already knew what was coming to him.” Ball averaged 14.6 points,  6.0 rebounds, 1.8 steals and a Division I-leading 7.6 assists, last season with the Bruins, during which he led them to a 31-5 record after they finished 15-17 the season prior. “It’s crazy. I couldn’t ask for anything more and to get to learn from [Magic Johnson] every day is a blessing,” said Ball. After attending Chino Hills (CA) High School, and spending a year at UCLA, Ball has spent his whole life living in Los Angeles. “It helps a lot,” said Ball on staying home. “I’m glad to be home so that [my mother] could come to most of the games. She gets better every day which is great. I know she’s happy at home watching right now.” Ball’s mother, Tina, is currently recovering from a stroke she suffered earlier this year (Feb. 21). After predicting Ball’s selection to the Lakers, his father Lavar made another bold prediction on Thursday, as he said, “Lonzo Ball is going to take the Lakers to the playoffs his first year. Come see me when he does.” Follow Jacob on Twitter