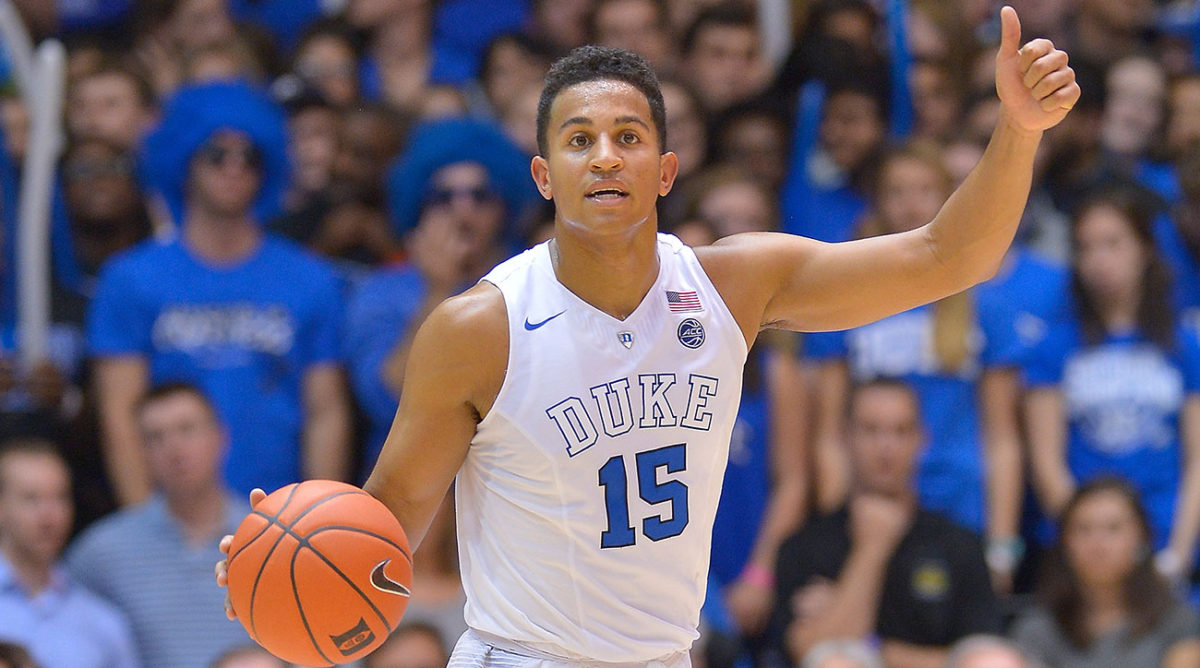 Frank Jackson will sign with an agent and remain in the 2017 NBA Draft, he and Duke head coach Mike Krzyzewski announced Friday. Bill Duffy of BDA is the favorite to sign Jackson, sources told ZAGSBLOG. Jackson was a major contributor for the Blue Devils as a freshman in 2016-17, playing in 36 games and making 16 starts. He averaged 10.9 points, 2.5 rebounds and 1.7 assists in 24.9 minutes per contest. “Frank has a bright future ahead of him,” Krzyzewski said. “His combination of athleticism and fearlessness makes him a special player. The next step for him is continuing to develop so he can maximize his exceptional potential. He’ll always be a member of our brotherhood and we want nothing but the very best for him.” Jackson will be Duke’s third one-and-done player this year, following forwards Jayson Tatum and Harry Giles. Jackson is now projected as the No. 36 pick by DraftExpress.com, but ESPN’s Fran Fraschilla told me for a story in the Durham Herald Sun that he could be a first-round pick. “Frank Jackson is gonna be a bargain at the end of the first round because if you remember him in high school, he’s athletic and he’s a shooter and scorer, something the league covets,” Fraschilla said. “And he was in a situation this year, there were so many cooks in the kitchen [at Duke], it was really hard to tell how good he was. And it’s my opinion that his talent level will find him a place in the late-first round because there aren’t that many guys to take once you get past 15. And if he stays in I think he’s gonna get drafted in the first round.” Jackson was named to the All-ACC Tournament second team after averaging 13.0 points and shooting .515 from the floor in Brooklyn as Duke made history by becoming the first team to win four games in as many days to claim the title. The Alpine, Utah, native made 51 three-pointers and shot .395 from outside the arc in 2016-17, both of which rank eighth on Duke’s freshman charts. Jackson scored in double figures 20 times as a freshman, reaching the 20-point mark on three occasions. He led the Blue Devils in scoring six times on the year and delivered a season-high 22 points against No. 15 Florida State on Feb. 28 to help spark Duke to victory in its home finale. He was the co-MVP of the 2016 McDonald’s All-American Game and also won the slam dunk contest the night before the game. Duke is the favorite for Class of 2017 point guard Trevon Duval, who has yet to announce and is also considering Arizona, Baylor, Kansas and Seton Hall. (Duke press release contributed) Follow Adam Zagoria on Twitter And like ZAGS on Facebook

Jordan Tucker Down to Duke, Syracuse