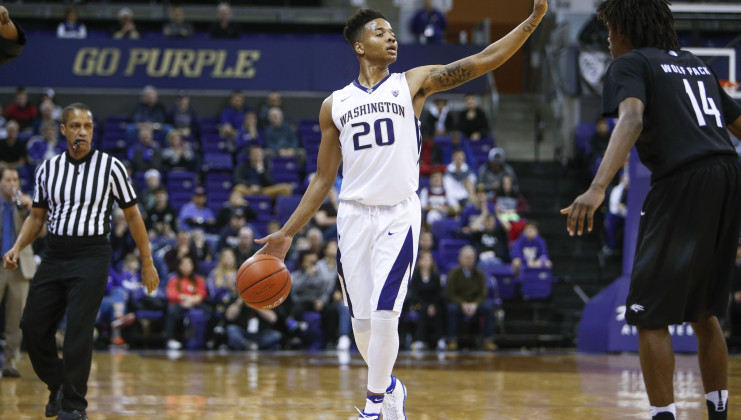 CHICAGO — Markelle Fultz, the 6-foot-4 point guard from the University of Washington who is the projected No. 1 pick in the NBA Draft, met with multiple teams here at the NBA Draft Combine, including the Knicks, Lakers and 76ers. Keith Pompey of the Philadelphia Inquirer first reported that Fultz met with the eight teams with the best chances to win Tuesday’s NBA Draft Lottery, adding that the point guard did not meet with Orlando. Boston (via the Nets), Phoenix, the Lakers and Philadelphia have the four best chances to win Tuesday’s Draft Lottery, with the Knicks at No. 7. Fultz, who finished the season averaging 23.2 points 5.7 rebounds, and 5.9 assists, won’t be at the Combine for workouts Thursday and Friday and won’t address the media. He attended a Knicks game in April and told reporters it would be “amazing” to play at Madison Square Garden. The Knicks are in need of a lead guard and even if they don’t get Fultz, could still potentially land UCLA’s Lonzo Ball, Kentucky’s De’Aaron Fox, N.C. State’s Dennis Smith or France’s Frank Ntilikina, whom they are said to be high on. DraftExpress.com currently has the Knicks taking Kentucky shooting guard Malik Monk at No. 7. Fox, the highest-projected player at the Combine, reportedly also met with the Knicks and Sixers. He will address the media on Thursday. Meantime, the Knicks will also meet Thursday with Purdue forward Caleb Swanigan, as first reported by the Daily News. The paper also reported that Knicks President Phil Jackson is part of the team’s contingent at the Combine, along with GM Steve Mills and coach Jeff Hornacek. Jackson skipped the event in 2016 when the Knicks didn’t own a first-round pick. The 6-9 Swanigan, who has yet to officially hire an agent, averaged 18.5 points and 12.5 rebounds this past season for the Boilermakers. His father, Roosevelt Barnes, believes he would be a great fit for the Knicks. “If they want to win a championship, they should pick ‘Biggie’ with their first pick,” he told ZAGSBLOG. “[He passes] the eyeball test and analytics[-wise], he’s the best player in the draft. “Just like [Kristaps] Porzingis, it may not be popular on draft night but it will be when Porzingis and Biggie are the cornerstones to an NBA championship.” Follow Adam Zagoria on Twitter And like ZAGS on Facebook

Frank Ntilikina Could be Good Fit for Knicks' Triangle Offense