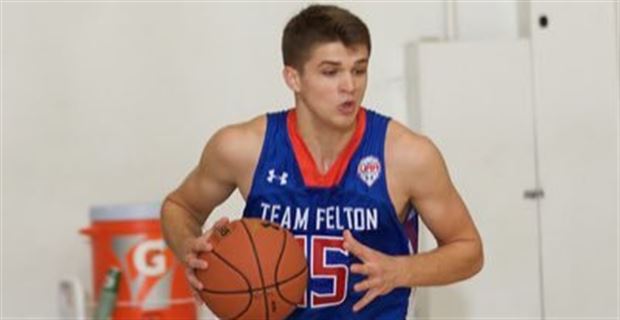 Joey Baker, the Class of 2019 small forward from Fayetteville (N.C.) Trinity Christian, plans to visit Kentucky and Louisville in the coming weeks. “I’m going to visit Louisville and Kentucky in late May or June,” he told ZAGSBLOG. Ranked the No. 9 small forward in the Class of 2019 by 247Sports.com, Baker has recently added several high-major offers. “Kansas, St. John’s, Louisville, N.C. State and DePaul have all recently offered,” he said before Oklahoma State also offered. “I’d say Louisville is working the hardest at this point. Louisville likes me on the wing scoring and creating.” His decision is still a long way off, but wherever he goes, Baker figures to be an asset to his future college. “[I bring] shooting, dribbling, passing, versatility on offense and defense and rebounding,” he said. “I’m just trying to win as much as possible and keep getting better. I feel like if I do that everything else will work itself out.” Photo: 247 Adam Zagoria on Twitter