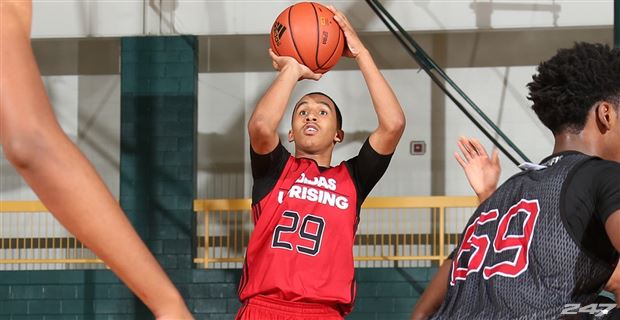 NEW YORK — Having secured his release from Georgetown, Tremont Waters says he and his father have heard from several schools. The 5-foot-11 Waters said he’s seen fans on Twitter say, “Come to Syracuse, come to Kansas, come to Creighton, stuff like that.” Speaking at practice at the Nets facility for Friday’s Jordan Brand Classic, Waters said Creighton “hit me up yesterday [Tuesday]” and my dad’s been dealing with the other coaches.” He added: ‘Their guard [Maurice Watson] just left and they’re pretty much saying that I would come in and just replace him and do everything that he did and hopefully be better.” However, Big East rules say that if you sign a National of Letter of Intent with one Big East school you cannot attend a second one. Syracuse landed Canadian point guard Howard Washington in the Class of 2017, while sources said Kansas is not recruiting Waters. Waters also said UConn is in the mix, but doesn’t feel the need to visit again. “I think I visited enough, being from Connecticut and going to camps and stuff when I was younger,” said Waters, a New Haven native. “So I think I visited enough.” UConn lost prized point guard recruit Makai Ashton-Langford, who then committed to Providence. “It’s definitely in the back of my mind, but I kind of want to see what other schools are saying and how they run their offense, stuff like that,” he said. Meantime, Waters met with new Georgetown coach Patrick Ewing shortly after Ewing got the job and said he’s still considering Georgetown. “It was really good,” he said. “I was kind of shocked when I saw him, I didn’t think he was going to be that tall. But he was saying the same thing that coach John Thompson III was saying, that he would come in but he would run a different type of offense, it would be more NBA-style. Waters said he initially asked for his release while JT3 was still the coach because he saw on Twitter and in news stories that the coach might be fired and he didn’t want to join a program facing that much uncertainty. “At the start of the season I saw Tweets on media about Coach Thompson being fired and there were rumors about it as the season started to go on and it just wasn’t looking good,” he said. “The season didn’t go that well and more and more and more Tweets and stories started to come out about him being fired so I didn’t want to go into that situation. I wanted to go into a situation where I didn’t have to worry about my coach being fired, so I just asked for my release.” As for the possibility of Allen Iverson reaching out to Waters, something that Ewing suggested but which would violate NCAA rules, Waters said, “I don’t think it’s legal so I don’t think they would do it.” As for when he hopes to decide, “I’m not going to put a timeframe on it, just as soon as possible.”