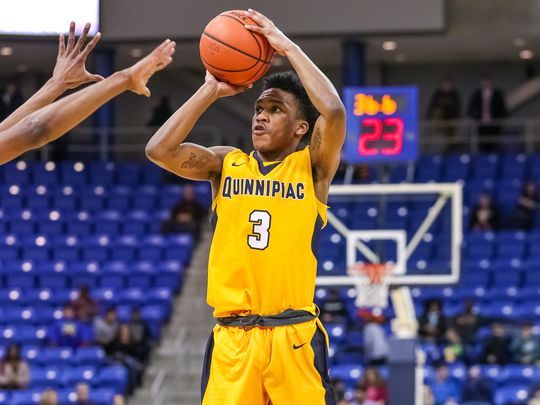 After sitting out next season due to NCAA transfer rules, Dixon will have three years of eligibility remaining for the Red Storm.

“Our staff looks forward to working with Mikey,” said St. John’s head coach Chris Mullin. “Mikey has a good offensive skill set, he can score at a high level and comes with Division I experience. We believe Mikey will be a good fit for our program and style of play.”

The 6-foot-2 guard from New Castle, Del. was the 12th-highest scoring freshman in Division I last season after starting 20 of 31 appearances for the Bobcats. Dixon scored double-figures 26 times, including 10 20-point performances, and finished the season with 512 points, the ninth-highest total in Quinnipiac history at the Division I level.

Dixon also averaged 3.7 rebounds, 2.3 assists and ranked 15th in the league with 60 3-pointers in 2016-17. A six-time MAAC Rookie of the Week honoree, Dixon recorded the top three single-game scoring outputs for a freshman in program history with a high-water mark of 29 points against Canisius on Jan. 20.  Dixon elevated his scoring average to 18.1 points per game in conference play, which was the fourth-highest average in the MAAC last season.

“I felt like St. John’s was the best opportunity for me on and off the court,” said Dixon. “I am excited to play for Coach Mullin and the rest of the coaching staff.”

“He was excited about being part of an exciting backcourt,” Terrell Myers of WE-R1 said. “He is one of the best guards in the country. He shoots it extremely well and creates space to get off his shot. He is a very good athlete. St. John’s is getting a future all-league player.”   Photo: Rob Rasmussen/Quinnipiac athletics Follow Dennis on Twitter