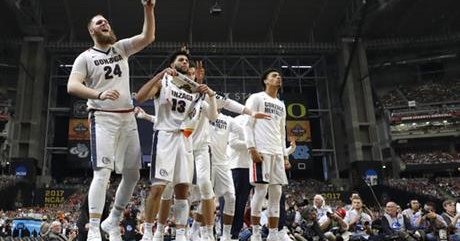 GLENDALE, Ariz. (AP) –The Gonzaga Bulldogs are headed to the national title game. Gonzaga weathered a furious second-half rally by South Carolina and held on to beat the Gamecocks 77-73 at the Final Four on Saturday night. The Bulldogs, who have lost once in 38 games this season, play the winner of the Oregon-North Carolina game for the national championship Monday night. South Carolina reeled off 16 straight points to take a 67-65 lead with 7:06 to play. Zach Collins answered with a 3-pointer to put Gonzaga back on top and the Bulldogs held on from there. Nigel Williams-Goss went for 23 points, six assists and five rebounds, Collins tallied 14 points and 13 rebounds and Przemek Karnowski had 13 points, five rebounds and three assists after getting poked in the eye by South Carolina’s Chris Silva during the first half. P.J. Dozier led South Carolina with 17 points and nine rebounds and Sindarius Thornwell struggled en route to 15 points on 4-of-12 shooting. Silva posted 13 points and 13 rebounds for the Gamecocks.

“There was no way I was going to come out of the game.” – Nigel Williams-Goss #FinalFour #UnitedWeZag pic.twitter.com/LKEqTC81wo

Kansas' Bill Self to Be Inducted into Hall of Fame