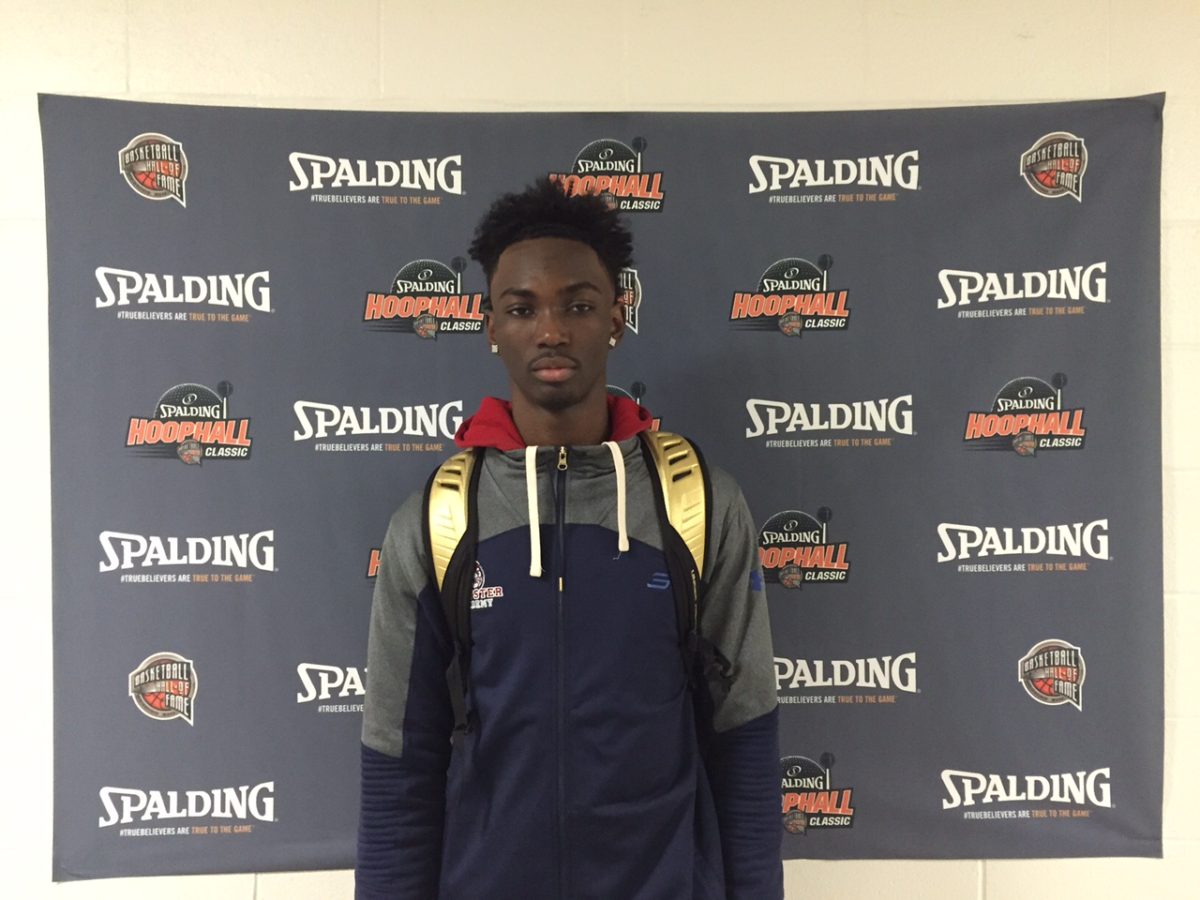 SPRINGFIELD, Mass. —Sid Wilson, the 6-foot-8, 180-pound Class of 2018 wing from Brewster (N.H.) Academy, says five schools are working the hardest for him at the moment. The New York City native listed UConn, Maryland, Texas, Indiana and Miami as the “top five right now.” He hasn’t set any visits, but said he’ll “probably visit UConn again when I get a break from school because they’re close.” He has also visited Texas unofficially and plans to visit again this summer. He broke down his five schools: Texas: “Just [Shaka Smart’s] message, he’s a great guy. Me and him got a good bond, [also] me and Coach [Jai] Lucas. They are in contact with my family, so they just really care about me as a person.” UConn: The Huskies went three deep with head coach Kevin Ollie and two assistants for several recruits at the Hoophall, including Wilson. “They’re great as well. Coach [Dwayne] Killings was recruiting me even when he was at Temple, so he moved to UConn and he started pushing for me there. Coach Ollie, when I went on an unofficial, his message was great to me. He just felt that I was one of those players he could just push to be great so that was mind-boggling to me, like he’s got that much faith in me as a player.” Indiana: “Coach [Chuck] Martin, he’s been recruiting me since I was a freshman at St. Ray’s, so he’s really one of the first people to believe in me. He came up to my school just to have breakfast with me one day so he’s really a good guy.” Miami: “Me and Coach L [Jim Larranaga] speak almost every day. We have a good relationship. He talks to me about recruiting, all the guys he has there, and their defensive systems and things like that.” Maryland: “Coach Bino [Ranson], he’s a real energetic guy. I went to the game when they played in the Barclays. Their fan base is amazing even when they play in New York City, and that’s something I like. I like having people behind me even when I play away from home. That’s really a big thing. The coaching staff is real energetic, the team is real family-oriented, so that’s really a big thing.” Since transferring to Brewster from St. Ray’s and reclassifying over the summer, Wilson said he likes the solitude and ability to focus on books and basketball. “It’s going good, it’s real cold up there, that’s really the biggest thing,” he said. “It’s quiet, I get a chance to work on my game. There’s nothing much to do up there so I get a chance to work on my game, that’s really what I wanted, that’s what I got.” Brewster coach Jason Smith said Wilson is improving since arriving. “I think he’s getting more and more confidence in terms of facing up,” Smith said. “He’s obviously always been a high-level athlete. I think now he’s improving his ability to defend away from teh basket and that’s where he needs to continue to improve.”   Follow Adam Zagoria on Twitter And like ZAGS on Facebook