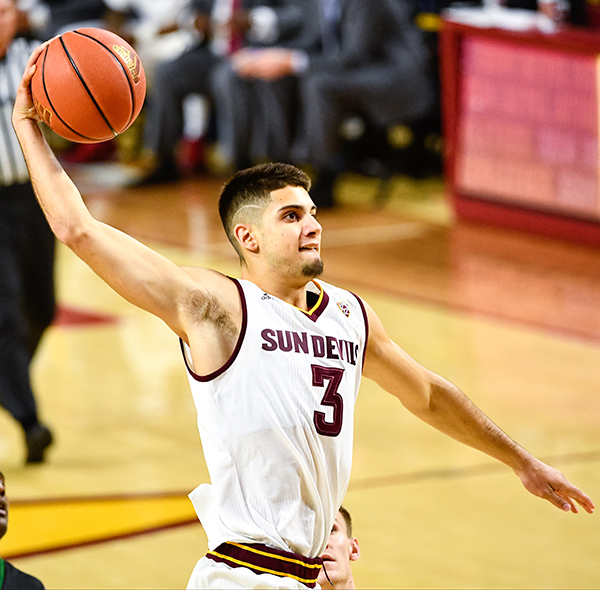 Kansas has landed Arizona State transfer Sam Cunliffe. Cunliffe, a 6-foot-6, 200-pound wing from Seattle, Washington, joined the Kansas team on Jan. 12 and will be able to practice with the team immediately and will be eligible following the fall 2017 semester. “We’d seen Sam play in high school and thought he was a great prospect,” Kansas coach Bill Self said of Cutliffe who went to Rainier Beach High School in Seattle. “Sam is a guy that is very athletic and can really shoot the basketball. He will be a player that will impact our program the day he becomes eligible. A lot of people view the year sitting out as a negative but I think Sam is looking at it as a positive; to come in here, get acclimated and practice against some really good players. He wants to get better and will have an impact on our program that enhances our opportunity to have a good team next year.” Cunliffe started all 10 games he played at Arizona State in the fall of 2016 and averaged 9.5 points and 4.5 rebounds. He was 15-for-37 (40.5 percent) from 3-point range with five steals and three blocked shots. Cunliffe posted five games with 10 or more points, including a double-double with 23 points and 10 rebounds against The Citadel (11/23). His Citadel totals were career highs as were his five assists for the game. “I knew I was going to either stay home and go to Seattle U. (University) or go to a school like Kansas,” Cunliffe said after he decided to leave Arizona State. “I feel my brand of basketball is how they play at Kansas. They move the ball, under a great coach, and I will be able to play with guys who play at the highest level. I wanted to play somewhere where I could be comfortable and I got all that on my visit. “I’m an unselfish player who wants to win,” Cunliffe said. “I want to get better every day. I feel sitting out a year is good because I can just come in and not worry about playing, just worry about doing things the right way. I want to practice hard and make this team better. I want to make sure to pick stuff up so when I am ready, I can step right in.” Coming out of nationally-known Ranier Beach High School, Cunliffe ranked No. 36 in the final 2016 Rivals.com ranking, No. 41 in ESPN100 and No. 45 in Scout.com. He averaged 21.6 points, 9.0 rebounds and 3.0 assists his senior season at Rainier Beach and in 2016 led the Vikings to their fourth state title in five years as he was named Class 3A state tournament Most Valuable Player. Cunliffe was the Seattle Times 2016 Player of the Year in the state of Washington. “We’ve recruited a lot kids out of Rainier Beach before and Kurtis Townsend knows everybody up there,” Self said. Cunliffe transferred to Rainier Beach after his junior season, having played for Bishop Blanchet the previous two seasons. He averaged 20.0 points, 5.0 rebounds and 5.0 assists per game during his junior campaign at Bishop Blanchet. Cunliffe joins guard Marcus Garrett and forward Billy Preston in the Kansas 2017 recruiting class. Garrett and Preston each signed a National Letter of Intent during the early signing period in November 2016. Preston is the No. 5 prospect by 247sports.com and No. 8 by Rivals.com and scout.com according to the 2017 national rankings, while Rivals.com ranks Garrett No. 37. Follow Adam Zagoria on Twitter And like ZAGS on Facebook