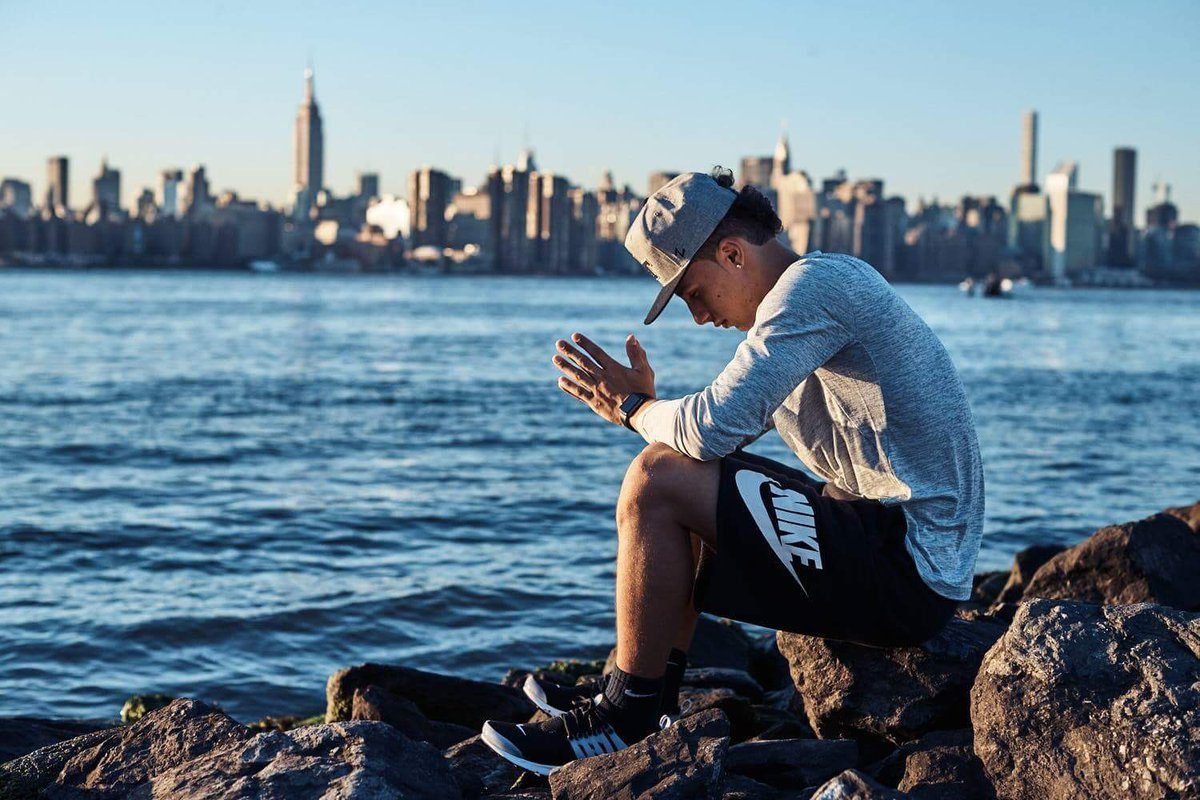 By MIKE McCURRY NEW YORK — Diana Martinez will not soon be forgotten, mainly because her grandson would never let that happen. The tokens of remembrance are everywhere. There are the three tattoos on the left side of his body, including an image of Diana’s face right over his heart; the pink socks to promote cancer awareness donned on game days; the #Everything4Her and #RestEasyMyLove hashtags incorporated in every one of his social media posts. On November 21st, stomach cancer claimed the life of Diana at just 54 years old. The Williamsburg neighborhood of Brooklyn lost a valued community member. Odilia Martinez lost her beloved mother. Jose Alvarado, arguably the best point guard currently on the New York City high school circuit, lost his world. “Every time I go on the court, it’s for her,” he said. “Every time I work out, it’s for her.” Alvarado is the unequivocal leader of a Christ the King (NY) program that has won five of the last seven CHSAA Class AA city championships. The reigning New York City Catholic High School Player of the Year is committed to play for Josh Pastner at Georgia Tech next fall. As impressive as Alvarado’s proclivity to fill up the box score is (he puts up 19.4 points, 4.1 assists, 5.4 boards, and 4.6 steals per night), the 6-foot, 155-pound senior is lauded just as frequently for his intangibles—his relentlessness, leadership, and an insatiable will to win. “A college coach told me [Sunday] that he’s on the floor more than any other player he’s ever seen,” said Christ the King head coach Joe Arbitello. Alvarado attributes that to his grandmother. “My Grandma gave me the heart that I got,” he said. “I got that killer instinct—that’s because of her. She wasn’t afraid of nothing.” *** A single mother of two girls, Diana always wanted a boy. It’s no wonder she was so persistent to spend quality time with Jose. Odilia was 17-years-old and still living in Brooklyn when she conceived her first-born. Upon going back to work at the bank, and with Jose Sr. also grinding to support the family, Jose was placed in daycare on Roebling Street. Diana inhabited the same building. If Diana was not at the nutrition company, where she toiled as a receptionist, she was with Jose, holding the fort down until Odilia got off her shift. Be it assisting with homework, dishing out sage life lessons, or simply kicking it, it was those late afternoons (often seeping into dinnertime) in which the perpetual bond between grandmother and grandson was formed. “She was the second mom,” recalled Odilia. “Whenever I couldn’t be there, she kept him.” 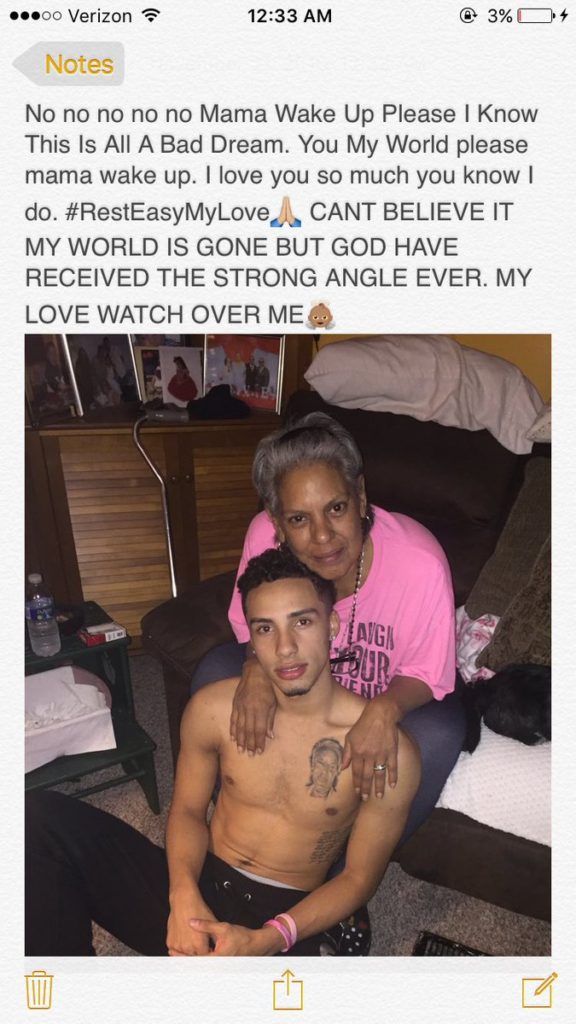 *** On November 9th, the Alvarado family’s life changed forever. Back in September, Jose had verbally committed to Georgia Tech, spurning local schools in Seton Hall and Rutgers (which composed his Top-3) as well as established programs like Indiana, Xavier, and Miami. He signed his written agreement with the Yellow Jackets on November 9th, the same day Odilia was informed by the doctors that Diana had two weeks left to live. Jose knew his grandmother was ill—she was first diagnosed with cancer in 2012. But he was unprepared for the sight of oxygen tanks attached to Diana when he called her via FaceTime to celebrate his pledge to the ACC. The next day, the Alvarado family trekked to the Pennsylvania-based hospital, unwilling to grasp that the end was near. Of the ensuing eleven nights that Diana continued to battle like hell, Jose, sometimes accompanied by nine family members all jam-packed in a tiny room, spent nearly every evening bedside, only returning to Queens for mandatory school obligations. “That was my everything,” Jose said. “That’s the reason why I started taking [basketball] seriously, because of her. Now she’s watching over me.” *** Arbitello knows talent when he sees it, having guided 14 players to the Division-1 ranks in eight-plus seasons as the Royals’ head coach. So when he could not divert his eyes away from a big, bushy-haired seventh grader on Court 2 at his own basketball camp, Arbitello inquired, ‘Who is that kid?’ “He was the most aggressive kid that I’ve ever seen,” said Arbitello on his initial impressions of Alvarado. “I wasn’t even sure if he was a point guard or not, but I knew he was a basketball player and he was somebody that I would want to coach because he’s so tough.” At the time, Alvarado had only been on the hardwood for a couple of years. He grew up as a shortstop—not a floor general—whose first exposure to an organized team did not come until fifth grade at The Pomonok School & STAR Academy, when the family relocated to Queens. As Arbitello puts his gaudy 199-53 (.790 winning percentage) record on the line in search of a milestone victory on Sunday against Bishop Loughlin, he benefits from having the ideal extension of himself on the floor in Alvarado. “Him and [former CtK star and current Arizona freshman guard Rawle Alkins]—their willingness to win is something that guys today don’t have,” Arbitello said. “That willingness to win makes Jose become an absolute nightmare on the basketball court.” Due to the personnel attrition that Christ the King faced after last year with the graduation of Tyrone Cohen, Jared Rivers, David Cole, Ronald Jefferson, and Tracy Cleckley, it was pivotal for Alvarado to take one last major step forward in the leadership department. Mission accomplished. “What Jose tries to tell these guys is we’ve been the dominant team in the CHSAA for the last ten years,” said Arbitello, whose starting lineup consists of three sophomores and a junior in addition to Alvarado. “We’ve won five city championships—all these people are trying to get one, and they’re coming after us every game. That’s what Jose’s trying to explain to these sophomores, and I think that’s the biggest help that he’s been to them.” 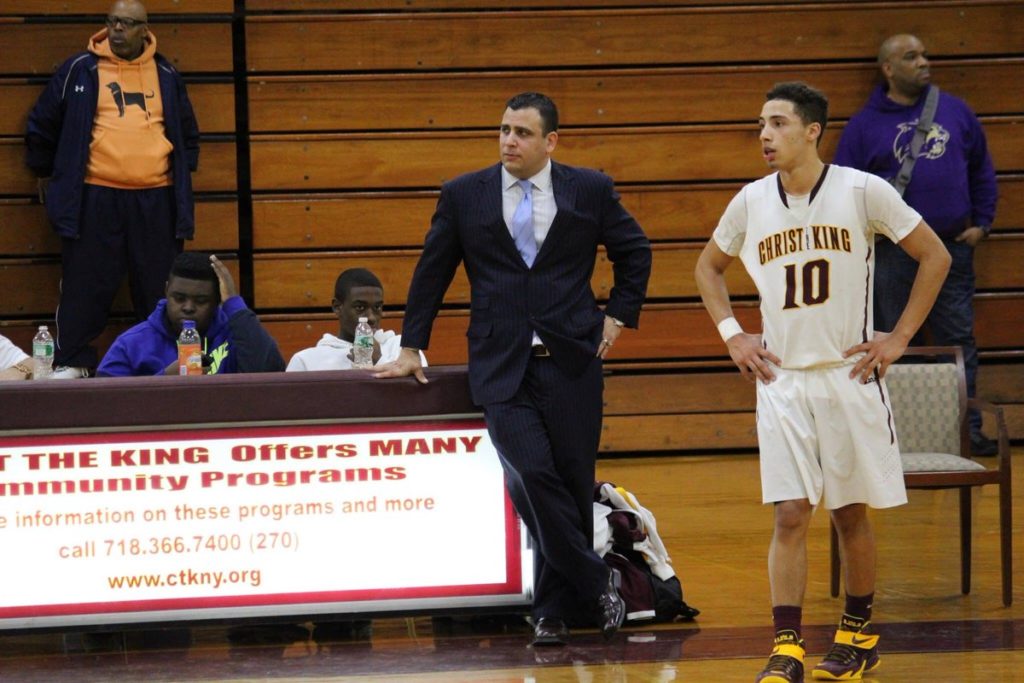 *** Georgia Tech wasn’t even on Alvarado’s radar on April 8th, four days prior to his 18th birthday, when the program scooped up Pastner, who somehow fled from Memphis in one piece. Nearly five months later, Pastner completed the recruiting heist, nabbing Alvarado as his first recruit on the job. Pastner jumped on Alvarado in May after seeing him for the first time during a Nike EYBL spring event, riveted by the point guard’s toughness, winning plays, and speed. The signature moment, if you will, occurred during the last game of a July recruiting period in Las Vegas. While Alvarado was giving it his all, per usual, many of his NY RENS’ teammates came out of the gates sluggish for a morning tipoff. At halftime, Jose informed them as much. “He laid into his teammates, because he was playing so hard because it mattered so much to him,” Pastner remembers. “He wanted to win so bad. That was big time.” Pastner knew he needed Alvarado. But how could he get through that Jose needed him? The sales pitch had to exceed the lure of the ACC, the city of Atlanta, and the academics. “I just think I was honest with him,” Pastner said. “I told him the truth all along the way, and I think he appreciated that.” Pastner’s candor and straightforwardness indeed won over Alvarado, who is the first to admit he does not trust easily. It was refreshing to hear his prospective coach lay out his perceived strengths and weaknesses—of the program, Jose, and even Pastner himself—as well as divulging exactly what other players he was simultaneously recruiting. Alvarado will be the first player from New York City to play for Pastner directly out of high school, which could spark a trend for the former assistant under Lute Olson and John Calipari. “We need to recruit the Northeast because one, the ACC stretches up-and-down the East Coast and two, Georgia Tech’s a strong name up and down the East Coast—especially with some of the great players that have played here from the Northeast,” Pastner said. That’s in reference to Kenny Anderson and Stephon Marbury, who paved the NYC-to-ATL road for Alvarado but did not factor into his decision. “They did get in contact with me,” said Jose. They said ‘Georgia Tech is where it’s at. You want to be the best? Go there.’ It’s a point guard program.” And Pastner is a point guard coach of sorts. He played with Mike Bibby at Arizona and coached Jerryd Bayless at U of A coupled with Derrick Rose and Tyreke Evans at Memphis. *** What more could a high school player already so feted want to accomplish before leveling up to the collegiate stage? After all, just within the last few weeks, Alvarado posted a quadruple-double (18 points, 10 rebounds, 10 assists, 10 steals) and joined the Royals’ exclusive 1,000-point club. For starters, he wants to get “the city” and “the state,” alluding to the CHSAA playoffs and the New York State Federation Tournament of Champions. Alvarado also yearns to make his jump shot “automatic,” as he puts it, and for his left hand to be just like his right in terms of having the ball on a string. If that come across as too stubborn and unceasing, deal with it. Jose is his grandmother’s grandson, through and through. “Very persistent,” said Odilia of the similarities between Diana and Jose. “It’s got to be their way. It was either her way or no way, and normally that’s how he is.” Photos: @RealRyteJose Follow Mike on Twitter Follow Adam Zagoria on Twitter And like ZAGS on Facebook