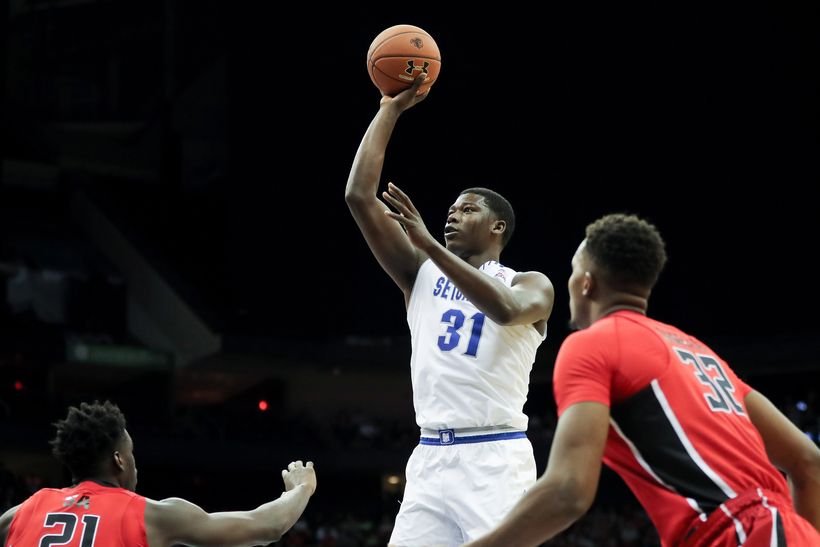 By DENNIS CHAMBERS NEWARK — Make that 21 straight wins by Seton Hall when Angel Delgado double-dips. The junior big man powered the Pirates to a 72-61 win over Rutgers behind his 19 points and 16 rebounds. It was the third straight win for Seton Hall in the Garden State Hardwood Classic, and Delgado’s performance garnered his second straight Joe Calabrese MVP of the game trophy. “I feel great,” Delgado said after the win. “We keep showing that we’re the best team in New Jersey.” Delgado set fire to Twitter last week after Seton Hall’s win over Delaware when he said that Rutgers could be the No. 1 team in the nation, but the Pirates were still going to beat them.

We overcame adversity tonight and it was a total team effort. Check out the highlights from our second half rally to win the #GSHC! #HALLin pic.twitter.com/IXXUJoxwLc

After starting the game slow – along with the rest of the Pirates who shot just 24 percent from the field in the first half – Delgado stepped up in the second half to become the difference-maker, finishing 7-of-19 from the field. “[A year ago] If he missed his first, he was 2-for-9 at one point, he would’ve been done,” Pirate head coach Kevin Willard said about Delgado’s growth as player. “He would’ve been done defensively, he would’ve been done rebounding, he’s matured. For the most part he just kind of kept in there .. he’s come a really long way emotionally.” Even the big man was aware of his struggles early on, but his determination for a victory didn’t let him get thrown completely off course. “It was tough in the first half, but I just want to win,” Delgado said. “I want to win so bad and the guys tell me, ‘We’ve got your back, we’ll keep giving you the ball’ and that’s what they did.” One of those guys, junior guard Khadeen Carrington – the game’s high-scorer with 20 points – knows what Delgado’s good play means to the overall success of the team, and he was sure to let his teammate know that. “It’s very important,” Carrington said of Delgado’s success. “I just told him take your time, he was rushing a little bit. Every team is going to double him, so I just told him watch out for the doubles, and that he had guards outside if he needed them. Second half that was the big difference, he took his time.” Friday night at The Rock proved to be Delgado’s sixth straight game with a double-double. While it’s no secret the damage he can do in the paint, Rutgers head coach Steve Pikiell went into the game hoping for a more even showdown in the front court battle. “He’s a really good player,” Pikiell said. “I watch every tape on him, I thought we had enough big guys, we just kept running big guys at him. I didn’t want him to get it in spaces where he was comfortable.” The in-state rivalry secured a sell-out of the Prudential Center in the first installment of the Willard vs. Pikiell era. For Delgado, an atmosphere like Friday night’s was a great feel, but the win over their North Jersey neighbors is just another step in the season journey to making another NCAA tournament. “It was good, I didn’t feel like that in a long time,” Delgado said. “It was packed, I really appreciated Rutgers and Seton Hall to sell out the Prudential Center. That’s a real accomplishment. But we just gotta move forward now.” Photo: Vincent Carchietta-USA TODAY Sports   Follow Dennis on Twitter Follow Adam Zagoria on Twitter And like ZAGS on Facebook