John Calipari Won't Send Rick Pitino a Christmas Card, But Might Invite Him on His Podcast | Zagsblog
Follow @adamzagoria

John Calipari Won’t Send Rick Pitino a Christmas Card, But Might Invite Him on His Podcast 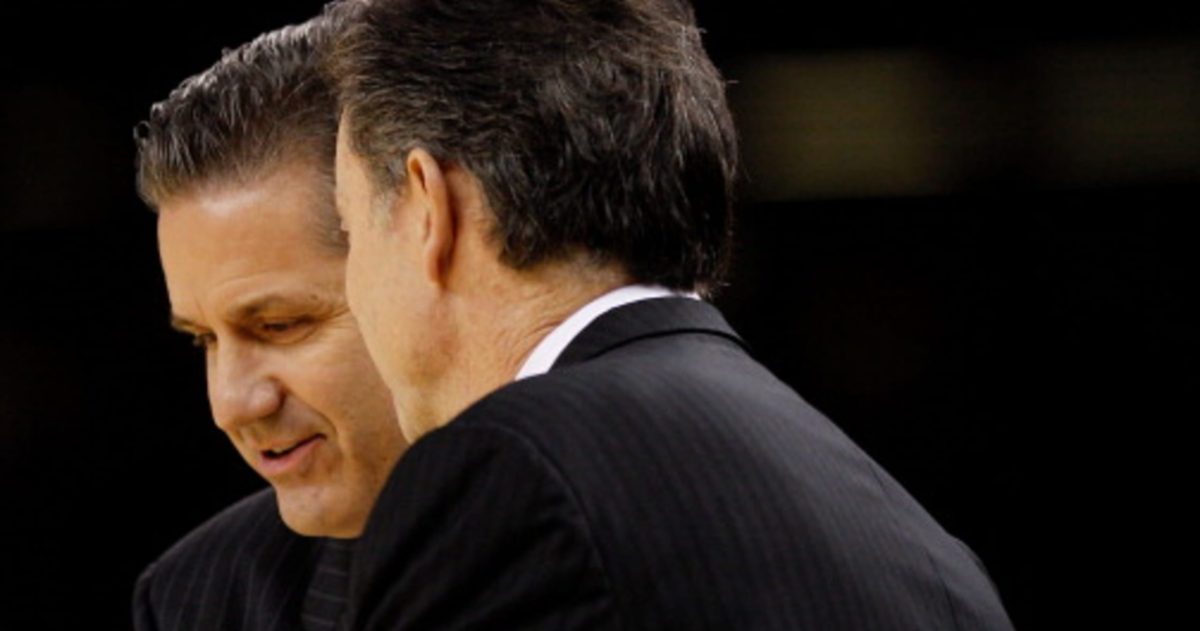 John Calipari won’t be sending Rick Pitino a Christmas card, but he’s open to having him on his Podcast. “[Our relationship] has been fine,” Calipari said ahead of Wednesday’s titanic matchup between No. 6 Kentucky and No. 10 Louisville (7 p.m., ESPN). “I mean, look, we’re 90 miles away from each other and at competitive, rival schools. You know, it’s hard to send each other Christmas cards. It is what is. I’ve known him for 25 years. I know how good a coach he is. He’s a great coach, he’s a Hall of Famer, he’s won everywhere he’s been. National championships, Final Fours. I mean, come on, you know how good he is.” Calipari is 8-1 all-time against Pitino, and Kentucky is 5-0 against Louisville when both are ranked in the Top 10. But Calipari isn’t taking that record for granted. “Well, if you listen to [West Virginia coach] Bob Huggins he’ll tell you he beat me 8 of 9,” Calipari said. “I don’t think any of the past games have any bearing on this game. And when I’m coaching against a guy that’s won some games against me, I’m not worried about the past games. I’m just saying, ‘How do we win this game?’ I would say [Pitino] is thinking the same way.” In June, Calipari appeared on Mike Lupica’s podcast, and the subject turned to NCAA violations and whether coaches should be held accountable for what happens under their watch. Calipari made sure to get a dig in on Pitino, and North Carolina’s Roy Williams. “You’re cordial,” Calipari said Thursday. “We’re not mean to each other, not nasty to each other. He and I worked out together for 30 minutes and talked [at Peach Jam]. Would you have liked to have a camera on that? We talked about his son and we were talking about what was going on and just went back and forth. I think that was after something you guys said he said or I said, we said. Anything I say is geared to somebody.” Speaking of Podcasts, Calipari wouldn’t mind having Pitino as a guest. He’s already had Duke coach Mike Krzyzewski. “I would love it,” he said. Mostly, Calipari said he’ll be happy when the game ends. “I’m happy when it’s over,” he said. “Just get it done, because everybody makes it life or death and it’s not life or death. It’s worse than that,” he said. “So, literally, and imagine Rick’s the same way: Just play the game, let’s see what happens and let’s go. We’ve got our league to deal with, he’s got his league to deal with, let’s just move on.” Photo: Getty Images Follow Josh Newman on Twitter

Battle of the Bluegrass Looming as No. 6 Kentucky Visits No. 10 Louisville

Hamidou Diallo to Take First Official to UConn This Week