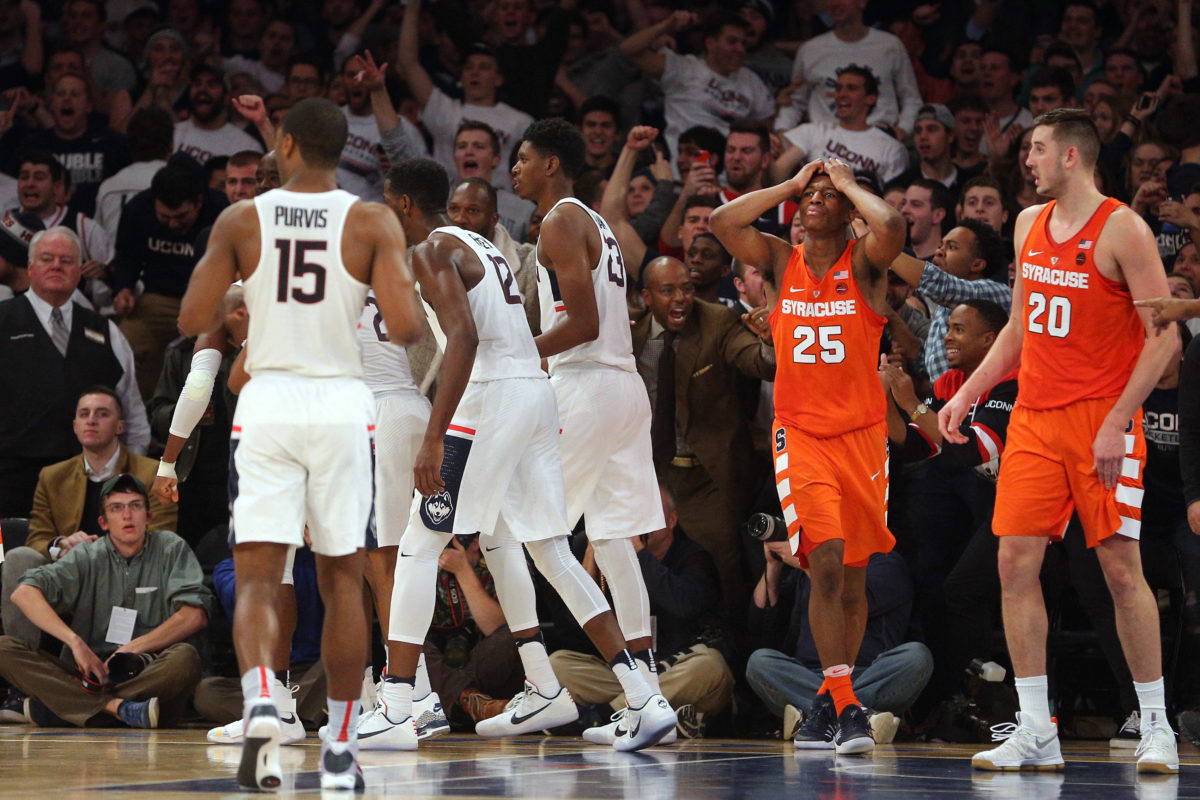 NEW YORK — Syracuse and Connecticut, forever rivals from a Big East that is never coming back, came to Madison Square Garden on Tuesday evening. Just like so many of those old Big East epics, aesthetics were not in play. The teams combined for just 30 total field goals and in the end, a foul call, and a questionable one at that, helped decide it as two free throws from Huskies freshman guard Christian Vital, a Queens Village native, with 2.2 seconds to play delivered a 52-50 win in front of 15,347 at the Garden. That foul call on Tyus Battle came after Vital hauled in a missed Rodney Purvis 3-pointer and was met with the roar of the usual pro-Orange crowd in Gotham. Replays showed that Battle, a former standout at New Jersey parochial powers Gill St. Bernard’s and St. Joseph (Metuchen), appeared to get all ball. “I didn’t see it, I don’t know anything about it,” Syracuse head coach Jim Boeheim said tersely, cutting off the reporter’s question in the process. “No, I got fouled,” Vital said, smiling as the majority of press conference attendees broke out in laughter, including teammates Purvis and ex-Long Island Lutheran star Kentan Facey. “I got fouled. It was the right call, it was the right call.” “It was a foul I guess, but I should’ve gotten the rebound,” Battle said. “I was a little surprised (by the call), but it happens. That’s basketball. I have to make a smarter play. I never should’ve fouled him, I should’ve gotten the rebound in the first place.” Bogus call, bad call or good call, on the surface, this was a win the Huskies desperately needed after a rough first month of the season. In that span, they opened with home losses to Wagner and Northeastern, and survived against Loyola Marymount and Boston University. In between, UConn finished fifth at the Maui Invitational, and has lost Terry Larrier and Alterique Gilbert for the season. “It was definitely a huge win,” said Purvis, who finished with a game-high 21 points to lead a comeback after UConn went down as many as 11 with 13:10 to play. “We had some early-season struggles, but to come together tonight in this atmosphere, in this historic place with this game, it was huge for us to come out with the win. “We stayed together, we stayed positive, and we continued to fight. That’s what UConn does and what it’s all about.” Conversely, Monday night was a poor showing and a bad loss for Syracuse, which has just one win over a team with an RPI better than 149, Monmouth, which had an RPI of 74 entering Monday and fell at the Carrier Dome, 71-50, on Nov. 18. Syracuse let a chance for a quality résumé win slip away, and opportunities to get one are dwindling. The highest-profile non-conference game it has left is Georgetown at the Carrier Dome on Dec. 17, and even that qualifying as a big win would be iffy. The Hoyas currently have an RPI of 119, and are rated 61st on KenPom.com Beyond the foul call, Boeheim was none too pleased on multiple fronts. The offense was putrid as the Orange shot just 25.9 percent from the floor and 23.1 percent from 3-point range. He also twice called out the play of point guard Frank Howard, who shot 0-for-9 and was generally outplayed by Purvis and Jalen Adams. Tyler Lydon, the projected No. 17 overall pick in the 2017 NBA Draft according to DraftExpress, shot just 1-for-7 before Boeheim said he needed to be taking 10 more shots a night. The sophomore forward came in to the game averaging 8.3 shot attempts per game, which is second on the team to sharpshooting graduate transfer Andrew White III. “Our offense is horrendous,” Boeheim said. “It’s been horrendous for three-and-a-half of the last four games that we’ve played. We played decent in the first half on offense against Wisconsin (on Nov. 29), but other than that, our offense has just not been good to win any games. “Literally, any games, so we have to get better.” Photo: USA Today Follow Josh Newman on Twitter

Mike Rice: The Rehabilitation of a Coaching Outcast