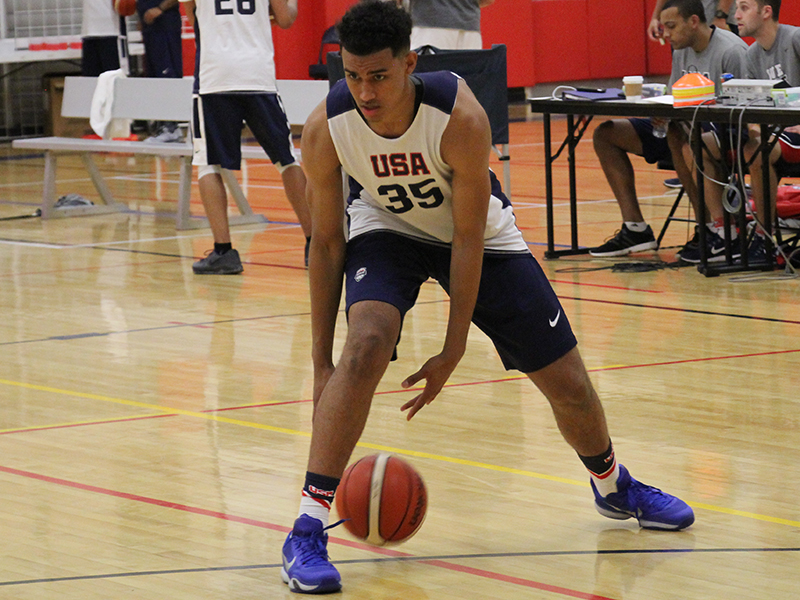 Jordan Tucker, the 6-foot-7 wing from Marietta (GA) Wheeler, is now focusing primarily on two schools and hopes to commit sometime in the next couple of months. Tucker, who ran with the NY Rens on the Nike EYBL circuit last summer, took an official visit to Indiana on Nov. 30 for the North Carolina game and will head to Villanova on Dec. 13 for the Temple game. “I loved the atmosphere [at Indiana],” Tucker said Sunday by phone of his trip, which included watching No. 10 Indiana take out No. 3 UNC, 76-67. “I got to go for a national game. Usually people go for football games and stuff, I wanted to switch it up, come for a basketball game. So I saw how they prepared for UNC and what they did and what they’re going to take away from them. Coach [Tom] Crean makes his players feel comfortable and always lets them know what they have to do to secure a ‘W.'” Indiana has long prioritized Tucker, who transferred from White Plains (N.Y.) Archbishop Stepinac last summer. “Yeah, I definitely know for a fact that I’m a priority for them, they really want me,” Tucker said. “I’m definitely interested and they need someone like me, a shooter or a scorer, that can come in right away and impact the program in a positive way.” Tucker also met with ESPN’s Dick Vitale at the game.

Man what a feeling to meet the legend @DickieV thank you for the advice I’ll always keep that in mind‼️??MUCH LOVE pic.twitter.com/6sYTOFLgn0

Villanova coach Jay Wright also visited with Tucker last Thursday following the Indiana visit. “He came to practice,” Tucker said. “He really just came to poke his face in to say what’s up. I take my visit there on the 13th. He watched me in practice, watched how I’m developing. I start as a wing but I’m also playing backup point guard, but he likes my versatility and how I can come in at Villanova and just shoot the ball and my passing ability. I want to see what he thinks for me from my perspective and what I can do there.” Tucker initially cut his list to Duke, Maryland, Syracuse, UConn, Indiana, Villanova, USC and Louisville, but has no other visits planned at the moment. “As of right now, no I’m not,” he said. “I was planning on committing after those two visits. Not right away but soon. I’m trying to but my goal is to commit in January [or] February the latest.” He’s not sure how he will commit. “Depending on how we’re rolling with the season, I’m just going to play it by ear, kind of,” he said. “Maybe we plan an ESPN game also, maybe do it on there or before we play a game.” At this point he’s primarily focusing on those two schools. “That’s what it’s looking like,” he said. “I’m still looking at Oregon and Arizona a little bit, but those two schools [Indiana and Villanova] have been making me a priority so that’s why I’m focusing on them just by nature.” As for his time at Wheeler, he’s enjoying his new spot. “This is the first high school team, not AAU, that I came where there are other high Division 1, high-caliber players, so it forces me just to work hard every day. Come to practice focused. I play my natural position and even the one, too. So it’s just helping me get more prepared for college, I think.”