Rhode Island Makes Statement Win Over Cincinnati, Has Huge Opportunity Against No. 1 Duke 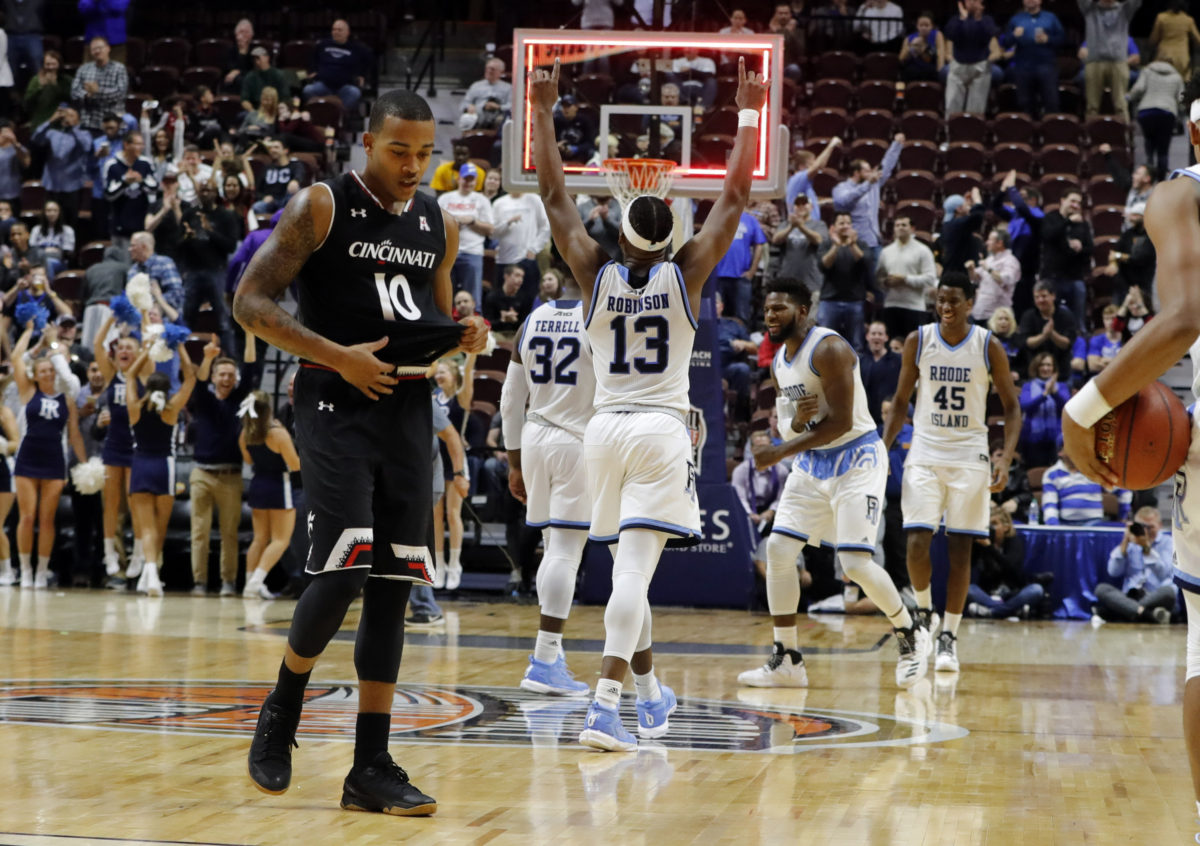 UNCASVILLE, Conn. — Until Saturday, Rhode Island was simply a talented team with a number next to its name. Now it has a Top-25 win and and a golden opportunity to knock off the No. 1 team in the nation on Sunday afternoon in Mohegan Sun Arena. “As far as playing Duke, I think that’s what every team looks forward to,” senior guard E.C. Matthews said after scoring 14 of his team-high 18 points in the second half as Rhode Island roared back from a 12-point first-half deficit to take down No. 24 Cincinnati, 76-71, in the Hall of Fame Tip-Off. “We know [Duke’s] history and the coach they have, so it’s going to be an opportunity for us and we’re going to be excited to play,” Matthews added. It was only the second top-25 win since Dan Hurley became the head coach at Rhode Island, and it came with his father, Naismith Hall of Fame St. Anthony’s coach Bob Hurley Sr., sitting courtside. Kuran Iverson had 15 points and 10 rebounds for Rhode Island, and Jared Terrell and Hassan Martin scored 14 apiece. Jacob Evans led Cincinnati with 25 points and 6 rebounds, and Kyle Washington went for 23 and 10. Duke advanced with a 78-68 win over Penn State in the first game, but both Duke and Rhode Island sustained injuries to key players. Rhode Island point guard Jarvis Garrett suffered a neck injury in the first half and his status going forward is unclear, while Duke lost sophomore big man Chase Jeter to an ankle injury and head coach Mike Krzyzewski called him “doubtful” for Sunday. Duke is already without three freshmen big men who are projected lottery picks in Jayson Tatum, Harry Giles and Marques Bolden. After a brutal season last year in which Matthews tore his ACL during the first game of the season and the Rams also sustained injuries to Garrett and Hassan Martin, Rhode Island was fully healthy entering Saturday and had dreams of dancing in March. With a win over long, physical and tough Cincinnati team — a perennial NCAA Tournament team itself — Rhode Island took a step in the right direction. “It’s a huge win,” Hurley said. “Obviously it’s something at the end of the year, in terms of what we want to accomplish NCAA Tournament-wise, that we know is an important win for our conference. It was an important win for us in terms of March, where obviously we want to participate.” Cincinnati coach Mick Cronin, whose team was out-scored 45-32 in the second half, said he was happy for Hurley and his players. “What happened is when the ball was on the floor or in the air, Rhode Island wanted the ball more than our team and that’s what happened.,” Cronin said. “I have great respect for my friend Dan Hurley, I’m happy for him. They taught us a lot about ourselves today and our deficiencies with physical and mental toughness.” Hurley explained that on Friday he showed his players a graphic depicting their last three games against nationally-ranked teams. “In these non-conference tournaments, three years ago against Arizona, Aaron Gordon I think he had three Top-10 highlights against us,” he said. “We weren’t ready to play at that level of game. Two years ago we played Kansas out in Orlando, they smashed us. Last year we played Maryland out in Cancun after a critical injury [to Matthews]. We weren’t ready. “But we feel like we’re ready. We feel like now we got a fully -loaded team and we’re ready to go and play against teams at Cincinnati’s level and have chances to win against some of the better teams.” Now the Rams get a golden opportunity to take down the No. 1 team in the land, even if Krzyzewski called them “banged up more than any team I’ve ever coached.” Photo: USA Today Sports Follow Adam Zagoria on Twitter And like ZAGS on Facebook