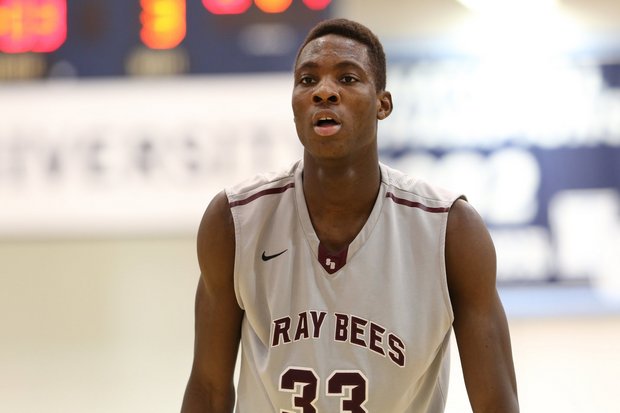 Bourama Sidibe will announce his college choice on Monday, St. Benedict’s Prep coach Mark Taylor told ZAGSBLOG. The 6-foot-10 native of Mali took an official visit to Syracuse this past weekend and has also taken officials to Oklahoma State and Texas Tech, while Seton Hall has also been involved. Syracuse associate head coach Mike Hopkins visited the 6-foot-10 Sidibe last week before the official. St. Benedict’s also produced former Syracuse point guard Tyler Ennis, now with the Houston Rockets. “They love me,” Sidibe said of Syracuse. “Mike Hopkins absolutely loves him. He said Bourama is a cross between Jerami Grant and Tyler Roberson,” Taylor aid of two Syracuse forwards. “Bourama in many ways is better, he is longer and has a better shot. When he fills out, look out.” Assistant coaches from Texas Tech and Seton Hall were also in to see Sidibe on Monday. Sidibe averaged approximately 13 points and 11 rebounds last season at St. Benedict’s, when the Gray Bees went 35-2. (Photo: AP) Follow Adam Zagoria on Twitter And like ZAGS on Facebook