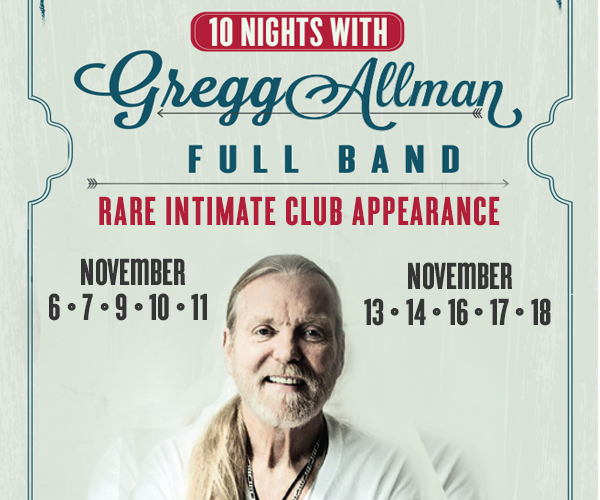 Gregg Allman has postponed all 10 shows of his City Winery Run in Manhattan until July — and won’t perform again before 2017 “due to a recent vocal injury requiring additional rest.” The rescheduled dates are as follows: July 2, 3, 5, 6, 9, 10, 12, 13, 16 and 17. ZAGSBLOG first reported earlier Tuesday that the 10-show run in November had been cancelled. “This is the hardest thing I’ve had to do in a long, long, time,” he said. “I’ve been on the road for 45 years because I live to play music with my friends for my fans. As much as I hate it, it’s time for me to take some real time off to heal. “Not making a show is a really hard decision for me because I want to play so bad, but it’s also hard on my partners and fans who make plans to be with me. I never want to put anybody in a bad spot. I’m so grateful for the people that I work with and for the fans that come to my shows and I want to be at my best for all of them. That means I’m going to have to wait until I’m feeling really good, not just good enough like I have been. Good enough isn’t working for us all.” The 68-year-old Allman, a founding member of the seminal group The Allman Brothers Band, has previously battled Hepatitis-C and also underwent a liver transplant. City Winery previously announced that he had cancelled his first two shows on Sunday and Monday. He was to resume on Wednesday night. “Gregg Allman will not be able to appear at the first two City Winery residency dates set to take place on Sunday November 6 and Monday November 7, due to a recent bruised vocal cord that needs a few additional days rest.  It is very important to Gregg to be at his best for his fans during this incredible run of shows at the City Winery. Full refunds are available for those who purchased tickets to these first two nights of the run. Allman will be back for this rare multi-date club run on Wednesday November 9, and the rest of the residency dates are still confirmed to take place as scheduled.” And like ZAGS on Facebook